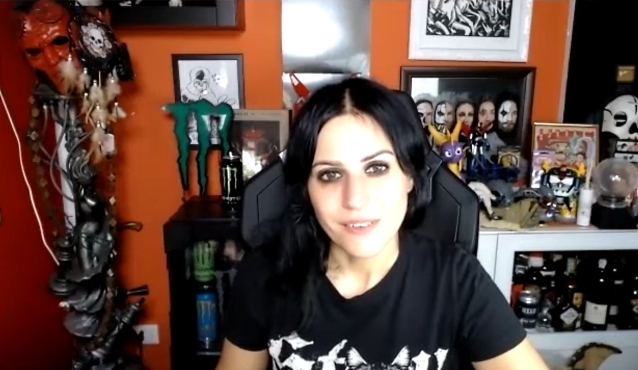 In a candid interview with "The Jasta Show", LACUNA COIL singer Cristina Scabbia — who grew up Roman Catholic in Italy — opened up about her views on religion. She said (see video below): "I have nothing against religion. I think that every person can decide for their lives if religion brings you comfort in a tough moment of your life. If you have lost, for example, someone that you love and you need comfort and you want to believe that this person will be in a different place, in a better place, I will not be the one to tell you what's wrong. What I don't understand is when religion literally leads your life and you don't question some things that are not logical, and you are following rules just because someone told you to follow, but they are making no sense. Even in the context of the religion, even if you read the Bible, and it's just, like, the Bible [doesn't] say this. The Bible itself [doesn't] say this. The Bible says that you don't have to gather to celebrate Jesus; the Bible is saying it. Why organized religions by men are deciding this? I try to observe different points of view every time, and that is why I'm more on the skeptical side."

Asked if she is atheist or agnostic, Cristina said: "Maybe more agnostic, because, to be honest with you, I would love to know that there is another place beside earth and behind us being living humans. I would love to reunite with my parents when I will be gone and to all the ones that I have lost. But to be honest, I don't know. I can only speculate; I can only hope that there's something like this. But I don't have any proof. I don't have a single proof."

Last year, Scabbia told Revolver magazine she was raised to "live with good principles," yet in adolescence, she became disenchanted by the hypocrisy of the Church. "I know so many people who would go to church and then leave and act like the worst Christians," she explained. "That's what turned me off. I was searching for answers, and I didn't get the answers I was expecting."

In a separate interview with NME, Cristina was asked if she was "team science" or "team theology." She replied: "Science. 100%. Actually, let's call it 80%. I still understand the spiritual part and I do hope there is something in us that lasts. I want to believe my loved ones are still around me in the form of energy, but I don't have any proof. That stops me from blindly believing.

"Obviously, Italy is a very religious country," she continued. "We have the Pope. But while I grew up going to church — my parents were believers — I never did believe. I used to just be confused why I had to go to church every week. I didn't understand why people didn't behave like they said they did in church. I always thought it was more important to be a good human being, to be a respectful human being, without any fear of God attached to it."

This past September, LACUNA COIL took part in "Black Anima: Live From The Apocalypse", an exclusive streaming show featuring a full performance of the band's latest album, "Black Anima", for the very first time, including songs never performed live, plus special backstage/off-camera moments and more. The Italian heavy rockers played the concert from the Alcatraz Club in Milan. "Black Anima: Live From The Apocalypse" was hosted on A-Live.