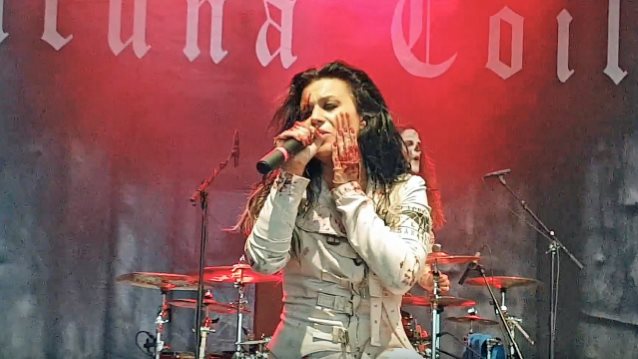 LACUNA COIL's CRISTINA SCABBIA: 'I Don't Need To Turn Into A Guy To Convince People I'm Capable Of Doing My Job'

Samantha Knight of Z-97.5 radio station conducted an interview with frontwoman Cristina Scabbia of Italian heavy rockers LACUNA COIL at this year's Louder Than Life festival, which was held September 30 – October 1 at Champions Park in Louisville, Kentucky. You can listen to the full chat using the SoundCloud widget below. A few excerpts follow (transcribed by BLABBERMOUTH.NET).

On the band recently hitting the twenty-year mark:

Cristina: "It's pretty crazy because I don't feel it at all. It doesn't feel that twenty years are gone. We feel even fresher as a band, which might sound weird. We still love everything we do. We're still loving it."

On whether it's more difficult to navigate through the music industry compared to when LACUNA COIL got its start:

Cristina: "It is because there is a lot more competition. Now there is the Internet that made a lot of things easier but complicated a lot of other things. Back then, you really had to put an effort to create a record, to write it, to record it in a proper studio, to put it on a tape or CD and send it to labels to get noticed. Now it's like you can improvise and think that you're an artist or a band and musician and think that everything is so easy just sitting on your computer."

On whether she considered being a woman fronting a metal band as an "uphill battle":

Cristina: "Honestly, I've never had any problems. I think it's about how you present yourself to people. The way you present yourself is going to get a reaction. I've never been hostile or presented myself like, 'Don't look at me weird because I'm a woman in the band!' I've always presented myself as a singer in the band, as one of the guys as well. I think, to be in this business to tour for a living, you need to be a little bit of a tomboy. I never got disrespected because I think you get disrespected as soon as you give the chance to other people to do that to you."

On whether being included in Revolver magazine's "Hottest Chicks In Metal" issue diminished her accomplishments as a singer:

Cristina: "I never thought about it [or] against it. I know guys very well; I tour with guys all the time. I know that when they say that a girl is hot, they don't say it in a disrespectful way. They mean a girl is good-looking and is attractive. So, I don't see it as objectifying a woman. As a woman in the music business, I know I took advantage of it. I took some sexier pictures sometimes because I love to be a woman, I love to be feminine at times. Maybe not today at a dusty festival. I'm not ashamed to be a woman. I don't need to turn into a guy just to convince people that I'm capable of doing my job. So when the first issue of 'Hottest Chicks In Metal' magazine came out with Revolver, I think it was something playful to give more attention to women in the business. I was the first woman to be on the cover, which makes me really proud."

On writing lyrics that relate to her everyday life:

Cristina: "I just feel comfortable. To me, it's very, very important, more than singing in the most perfect way, is to really communicate to whoever is listening. One of the best compliments I got the other day, they told me 'There are a lot of good singers and you're good singer, but you really hit my heart because you mean every word you're singing.' That's my point. I know I'm not the best singer on earth, but I know that I believe in every word I'm putting out."

LACUNA COIL's first-ever book, titled "Nothing Stands In Our Way", is scheduled to be published around the world in early 2018. The book is described in a press release as "the full twenty-year story of the Italian gothfathers as told by the band in their own words. Illustrated throughout with rare and candid photographs, memorabilia and personal artefacts, it will see founding members Andrea Ferro, Cristina Scabbia and Marco Coti Zelati sifting through the birth, growth and full flowering of the band to tell twenty years of LACUNA COIL.