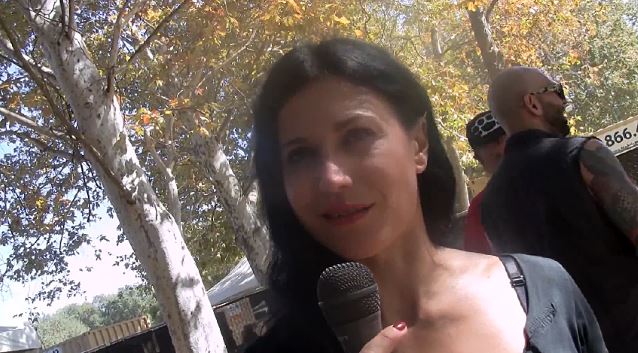 LACUNA COIL's CRISTINA SCABBIA: 'I Like To Interact With The Fans'

On September 14, IndiePower.com conducted an interview with vocalist Cristina Scabbia of Italian heavy rockers LACUNA COIL at the Aftershock festival in Sacramento, California. You can now watch the chat below. A couple of excerpts follow (transcribed by BLABBERMOUTH.NET).

On her proudest accomplishment as a member of LACUNA COIL:

Cristina: "Just the fact that we've been around for so many years and we still have fans out there that are following us and we're achieving more and more fans with every album, I think it's a great accomplishment, especially in a market that is very saturated with so many bands, so many bands on the road, so many new bands and Internet. [People] are bombarded by [information] and news and new music, so it's hard for the kids to choose. So I think we're already very, very lucky and blessed to be here."

On how she tries to connect with LACUNA COIL's fans:

Cristina: "Personally, I'm very, very active on social networks. I like to interact with the fans, I like to try to reply [to] their messages. And I'm really happy that the barrier in between the musician and the crowds fell down, because it was about time. So I like to show them what I'm doing on the backstage, even more private stuff that I do. [I] never really go into too much private stuff, but I show them parts of my house, or if I go to some awards, I'm gonna show them the backstage or whoever I'm meeting. I think it's important to interact at this level…. I want them to see the Cristina Scabbia of LACUNA COIL, but I also want them to know the Cristina, the everyday Cristina, off stage."

LACUNA COIL's latest studio album, "Broken Crown Halo", sold around 13,000 copies in the United States in its first week of release to debut at position No. 27 on The Billboard 200 chart. The CD arrived in stores on April 1 via Century Media.

LACUNA COIL is currently touring as a quintet following the departures of guitarist Cris "Pizza" Migliore and drummer Cristiano "Criz" Mozzati. Marco "Maus" Biazzi is handling all guitar duties for the band while drummer Ryan Blake Folden is sitting behind the kit.