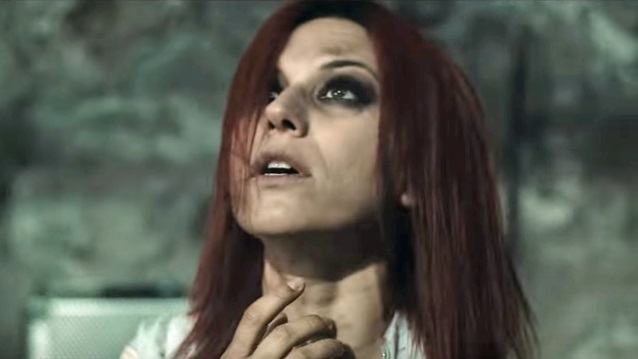 Asked if she uses Spotify and what her opinion is of streaming-music services in general, Cristina said: "I do. I actually like the idea, because I'm a really lazy listener. Because when I'm home, I like to be surrounded by music, but if you start asking me the titles of the songs, the titles of the records, I'm, like… unless they're big classics, sometimes I know the song and I even know the lyrics, but I don't know the title. And I love to listen to music when I'm home, when I'm around. So with Spotify, it's cool, because I can have my own setlist, my own playlist, but at the same time, when this is over, it keeps on going, and it kind of keeps the same vibe of my taste, of what I like, so I can discover new bands. And I can go, 'Oh, I like this song. What is it?' And I can check it out and maybe add it to my playlist."

She continued: "I think it's cool to discover new music and to listen to the old classics. Sometimes it also helps me to remember our lyrics. When we're preparing a show, I put a setlist with our songs, and then I listen to it, and I'm just like, 'Okay.' So I really, really like Spotify. And I think it's an intelligent way to kind of give some money to the artists as well, which I think is fair. Of course, it's not the same amount of money that you would get through the regular publishing if you sell a CD or the money that you would get from selling merch at the venues. But I think that it's way better than just downloading it illegally. This way you can have some music. It's something in between. 'Cause I understand that there's not a lot of money around, and kids have to play with whatever they have — they have to survive, and they want to buy music as well. But from the artist point of view, it is important, because you're investing a lot of time and a lot of money in what you create, so I think it's fair to have something back just for the fact that this way, you company can keep on going and creating, 'cause it's a cycle. It's not because you want to have a pool in your home — which we don't have. It's to create more music, to create more merch, to create more stuff for whoever likes our music and us."

Cristina also talked about the fact that many artists rely on crowdfunding campaigns to raise the money needed to pay for the making of their albums. "It is weird, because, to me, the logical thing would be I give you [an album], which, to me, it's half of my heart, if not all heart, and you give me some of the money, and with this money, I can invest it in another heart that I can give you," she said. "So I think it's absolutely fair. It's the same thing as going into the grocery store and buying some food. This way they can produce more food they can sell you. It's the same thing — it should be a cycle to keep things going."