Richmond, Virginia metallers LAMB OF GOD will embark on a U.S. headlining tour in January/February 2016. Direct support on the trek will come from ANTHRAX The trek will begin on Friday, January 15 in Pittsburgh, Pennsylvania and visit several major U.S. markets before coming to a close in Los Angeles, California on February 12.

LAMB OF GOD's seventh full-length album, "VII: Sturm Und Drang", was released on July 24 via Epic in the U.S. and Nuclear Blast Entertainment in all territories outside of North America. The CD was once again produced and mixed by Josh Wilbur with engineering by Wilbur, Nick Rowe and Kyle McAulay, and was recorded at NRG Recording Studios in North Hollywood, California and Suburban Soul Studios in Torrance, California.

Beginning in the fall of 2014, ANTHRAX — Charlie Benante (drums),Scott Ian (rhythm guitar),Frank Bello (bass),Joey Belladonna (vocals),and lead guitarist Jon Donais — took their time in the studio recording the follow up to their Grammy-nominated, critically acclaimed 2011 album, "Worship Music". The band recorded some 20 original songs, almost twice as many as they had ever brought into the studio in the past. 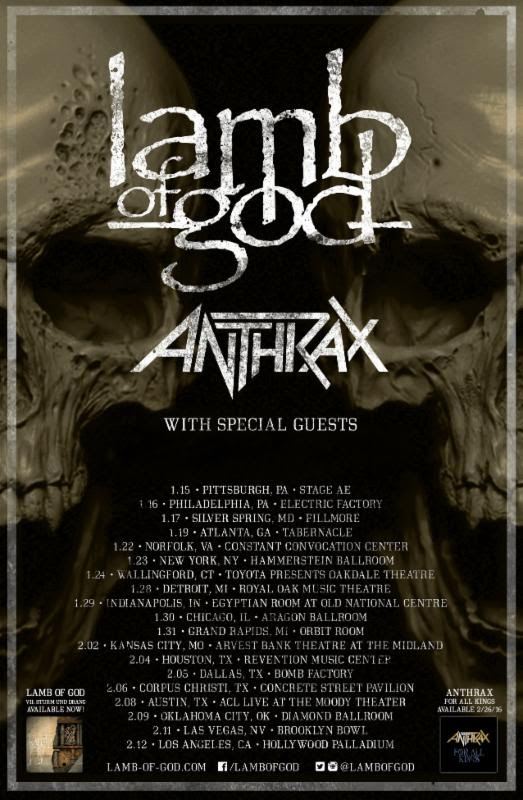