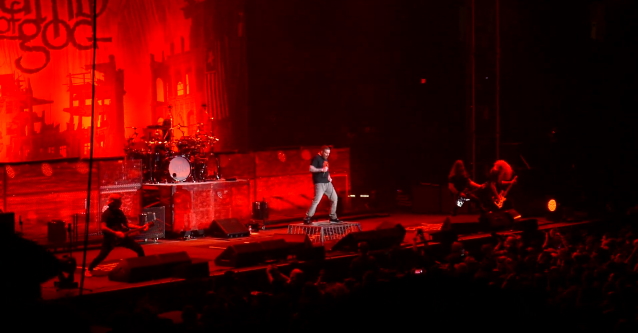 LAMB OF GOD has been forced to cancel tonight's (Thursday, April 21) performance at the Allen County War Memorial Coliseum in Fort Wayne, Indiana. The show, which is part of "The Metal Tour Of The Year" with MEGADETH, TRIVIUM and IN FLAMES, will go ahead with the other bands playing their sets as scheduled.

LAMB OF GOD's concert cancelation comes two days after frontman Randy Blythe missed the band's concert in Grand Rapids, Michigan after testing positive for COVID-19, the disease caused by the SARS-CoV-2 coronavirus. Filling in for him at the gig were TRIVIUM's Matt Heafy and IN FLAMES' Anders Fridén, as well as Mark Hunter of CHIMAIRA, which supported LAMB OF GOD on a U.S. tour back in 2003.

Earlier today, LAMB OF GOD issued the following statement: "Fort Wayne - we made our best efforts to put on a show tonight but unfortunately it is just not possible. Mark Hunter went above and beyond to make the show happen for us Tuesday and unfortunately has fallen ill today (NOT Covid). We truly appreciate his efforts but it appears the universe has other plans for us. We are working hard to make the show happen tomorrow and will update our fans in Green Bay as soon as we can. MEGADETH, TRIVIUM and IN FLAMES will play as scheduled tonight. Thank you for your patience and understanding."

Hunter added in a separate statement: "To the thousands of people that were counting on me to step up to the plate once again, I sincerely apologize I couldn't deliver.

"Words can't express my gratitude toward LAMB OF GOD for bringing me into the family. Tuesday was one of the best nights of my life. It felt incredible to share the stage with you and feel the power of what you guys have become. Randy's shoes are impossible to fill, but I'm glad I was able to wear them for a night.

"I wish the organizers, promoters, IN FLAMES, TRIVIUM, LOG, MEGADETH, and everyone else involved with The Metal Tour Of The Year a successful run. Thanks for treating me with hospitality and kindness.

The following day, Hunter clarified in a new tweet: "I've seen a few comments suggesting that I blew my voice and that's why I wasn't at the LOG show. You don't spend all day in the ER with that. I have a genetic condition that flared at the worst time."

LAMB OF GOD and MEGADETH kicked off the second leg of "The Metal Tour Of The Year" on April 9 in Las Vegas, Nevada. Other upcoming shows include Green Bay, Wisconsin (April 22) and Sioux Falls, South Dakota (April 24).

LAMB OF GOD is continuing to tour in support of its latest, self-titled album, which was released in June 2020 via Epic Records in the U.S. and Nuclear Blast Records in Europe.

Fort Wayne - we made our best efforts to put on a show tonight but unfortunately it is just not possible. Mark Hunter...

I've seen a few comments suggesting that I blew my voice and that's why I wasn't at the LoG show. You don't spend all day in the ER with that. I have a genetic condition that flared at the worst time. pic.twitter.com/vDZKPQzTg6 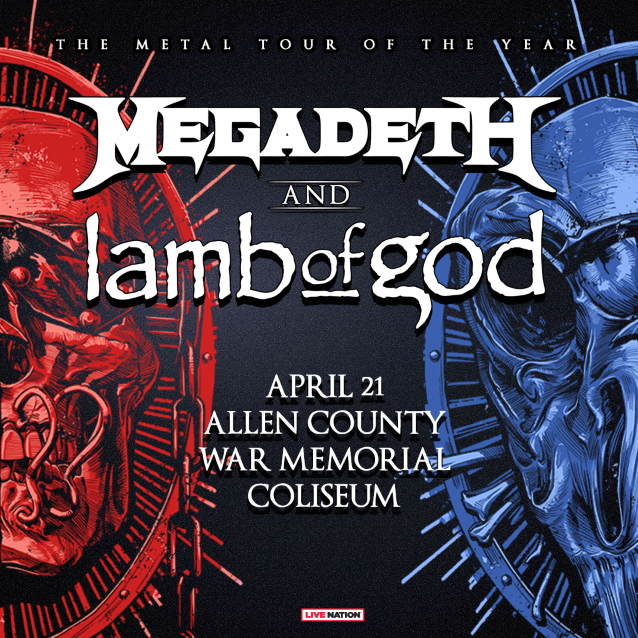