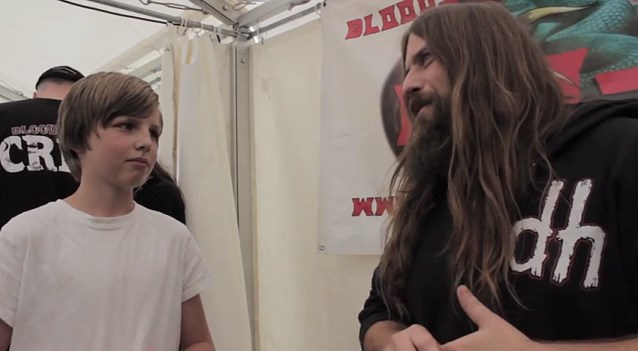 A young British rock fan from EQPTV conducted an interview with guitarist Mark Morton of Richmond, Virginia metallers LAMB OF GOD prior to the band's August 10 performance at the Bloodstock Open Air festival at Catton Park, Derbyshire, United Kingdom. You can now watch the chat below.

As previously reported, Prague, Czech Republic's High Court upheld LAMB OF GOD frontman Randy Blythe's "not guilty" verdict on June 5 in connection with the death of a fan three years ago. The court's decision is final.

A three-judge panel on March 5 acquitted Blythe of manslaughter in the death of 19-year-old Daniel Nosek.

Blythe was facing the possibility of conviction and a long-term jail sentence after a May 2010 incident in which Nosek, who attended a LAMB OF GOD performance in Prague, died almost a month later, allegedly from injuries sustained when he was thrown off the stage.

Though Blythe faced up to 10 years in prison, during the closing argument, prosecutors only asked the judge for the minimum sentence of five years.

In a recent interview with Full Metal Jackie, LAMB OF GOD bassist John Campbell spoke about what has been the most life-changing aspect of everything that's happened over the last year. "It definitely makes you wonder where exactly you're headed, what options you have in front of you," he said. "I would say just the not knowing whether or not we were going to continue on with the band was an interesting situation to deal with."

He added: "The incident in Prague was a situation where things were not done the way they were supposed to and a tragedy occurred. There's a reason why things are supposed to happen a certain way and people are supposed to make sure they happen that way this point forward. Randy takes the stage to make sure everybody's there to have a good time and to watch out for everybody, I don't think it’s changed anything at all."