Grammy-nominated, chart-topping Richmond, Virginia-based metallers LAMB OF GOD will release their highly anticipated seventh full-length album, "VII: Sturm Und Drang", this July via Epic in the U.S. and Nuclear Blast Entertainment, with whom the band signed a record deal for all territories outside of North America. The CD was once again produced and mixed by Josh Wilbur with engineering by Wilbur, Nick Rowe and Kyle McAulay, and was recorded at NRG Recording Studios in North Hollywood, California and Suburban Soul Studios in Torrance, California.

Today, after weeks of hinting at fans about the imminent release, the band is unleashing a brand new track, "Still Echoes", via LambOfGodVII.com. It can also be streamed in the YouTube clip below.

"Still Echoes" will be available via all digital retailers and streaming services beginning Monday, May 18.

LAMB OF GOD frontman Randy Blythe states: "The time has come to give the fans their first taste of the new LAMB OF GOD album.

"This is a very, very dark, yet sonically highly varied, record.

"As it's always good to come out of the gate hard with a fast and aggressive one, we chose this track, 'Still Echoes', to kick it off. Enjoy/destroy."

During a May 2010 LAMB OF GOD show in the Czech Republic, 19-year-old concertgoer Daniel Nosek sustained a head injury that allegedly led to the fan's death. Blythe was charged with manslaughter in the case, but was eventually acquitted.

"People shouldn't expect a prison record," Blythe tells RollingStone.com about "VII Sturm und Drang". "But I write about things that affect me very deeply. And going to prison in a foreign country and being charged with manslaughter will affect you — trust me — very deeply."

He adds that "Still Echoes" "is a history of [Prague's] Pankrác Prison," where he was incarcerated for over a month. The first line of "Still Echos" reads: "A thousand heads cut clean across their necks, right down the hall from me." Blythe says: "There was a guillotine right down the hall from me, from when the Nazis had the prison. From 1943 to 1945 they executed almost 2,000 people by the guillotine, because it was cheaper than shooting and quicker than hanging … They call it the Pankrác 'Saw Room' or the 'Axe Room. I sat there at night, and I’d think about all those dudes that got their heads chopped off— men and women — in that place not too far from me."

Markus Staiger, Nuclear Blast owner and founder, enthuses: "What an honor to work with LAMB OF GOD. I've always been a big fan of their music and we now get to work with them on their new crushing album!"

Adds LAMB OF GOD drummer Chris Adler: "Finally joining forces with Nuclear Blast Entertainment outside of North America is something LAMB OF GOD is excited to finally see happen. We first met back in 1997 — almost signed then, but have been flirting ever since! It's now time for a new chapter for us to connecting with our friends and fans overseas, which is long overdue!

"See you all very soon — with a nasty new album!"

During a January 2015 interview with SiriusXM's Jose Mangin on Liquid Metal's "666-LIVE" call-in show, Chris Adler stated about the material for LAMB OF GOD's next CD: "It's great. I guess the thing that I was overwhelmed with was the idea of us taking the year off of 2014 and then have us come together basically around now and start putting things together. But, as usual, everybody is a little antsy and wanting to jam, and it wasn't, like, oh, hey, Willie [Adler, guitar] has an idea and Mark [Morton, guitar] has this kinda cool solo thing he wants to add on top of it. Both of these guys came in with about fifty different song ideas. So what's been great is just going through all these ideas, which are all really good, and being able to say, 'Okay, we have this much material. Let's pick the top 10 or top 15 or 20, and just keep working on that. Then they get upset, because number 42 had their favorite part. So, okay, grab that favorite part from 42 and let's make song 6 way better. So it's been that kind of a process as we go along."

He continued: "I've noticed the guys are really writing the kind of stuff that I find myself kind of… I don't know… I don't wanna say 'singing along,' because there's no vocals on them yet, but the melodies of the ideas really stick with me, which is one of the things that, if I were to ever complain about more of the recent stuff that I've been buying music-wise… It's great while I'm listening to it, I'm impressed, it's over my head, it blows me away, but when I'm done with it, I couldn't tell you how it goes."

Adler added: "Our goal is, you know, that the guys that'll write the songs that stick with you are the guys that are gonna stick around. So I'm really impressed with what these guys have been doing on a songwriting level — stepping it up and writing stuff that kinda sticks with you."

LAMB OF GOD's last album, "Resolution", sold around 52,000 copies in the United States in its first week of release to land at position No. 3 on The Billboard 200 chart. 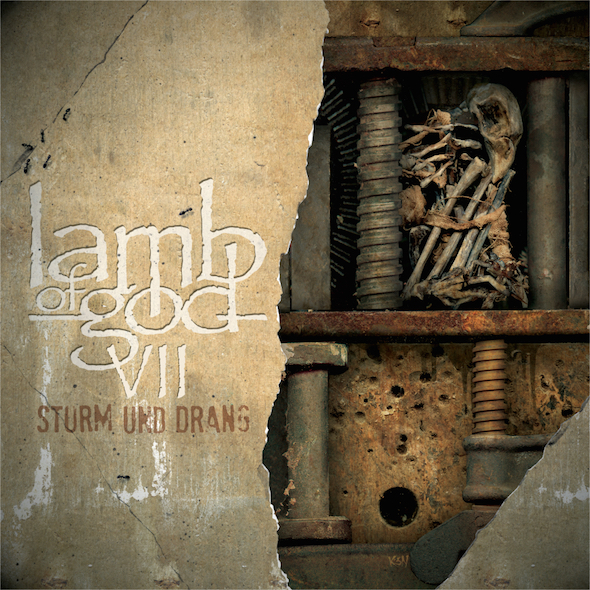