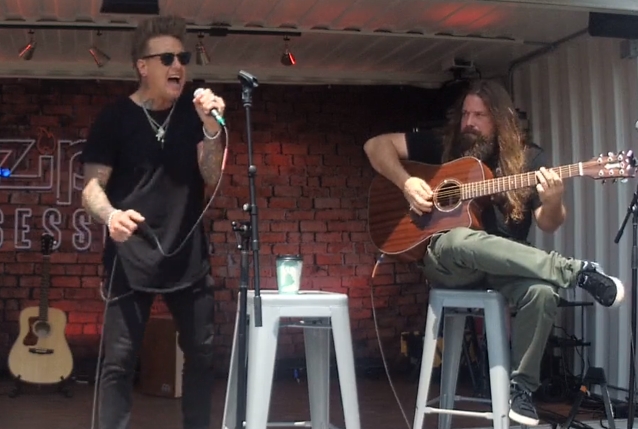 Jacoby Shaddix (PAPA ROACH),Mark Lanegan (SCREAMING TREES) and Mark Morales (SONS OF TEXAS) joined LAMB OF GOD guitarist Mark Morton for an acoustic set earlier today (Saturday, May 18) at this year's Sonic Temple Art + Music Festival, which is being held May 17-19 in Columbus, Ohio. The event was part of Zippo Encore's "Zippo Sessions", exclusive, intimate acoustic sessions with some of the hottest bands playing at the major festivals that the company booth attends. Watch video footage of the performance below.

Regarding how Shaddix ended up singing the song "Sworn Apart" on "Anesthetic", Morton told Consequence Of Sound: "I've known Jacoby for years, and the PAPA ROACH and LAMB OF GOD camps are pretty friendly, just from having done festivals and stuff together. I didn't hear anybody but Jacoby singing that song."

Jacoby just did an acoustic session with @MarkDuaneMorton of @lambofgod at @SonicTempleFest. You missed out if you aren’t here! pic.twitter.com/u4DXN51NYZ