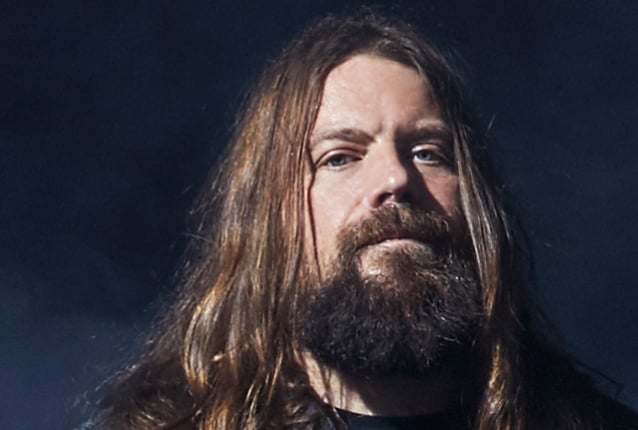 In a recent interview with A&P Reacts, LAMB OF GOD guitarist Mark Morton was asked if it's important for him to use the platform that he has, including his Twitter account, to create awareness about the things that are happening around him. He responded (see video below): "I'm starting to. I've been pretty vocal, and, I guess, at times controversial. It's its own little bubble. And if you had asked me this a couple of years ago, I would have said that it's not important; it's just kind of what I do. But I'm starting to wonder if it's not important.

"When something's really wrong or there's a discussion not being had or there's something being ignored… I have a platform, and I have a platform in our music, in what we talk about lyrically, and social media, for better or worse, is a platform — I don't know if it's the best one, but it is one, and it's one I engage in.

LAMB OF GOD will release its new, self-titled album on June 19 via Epic Records in the U.S. and Nuclear Blast Records in Europe. The follow-up to 2015's "VII: Sturm Und Drang" marks LAMB OF GOD's first recordings with Cruz, who joined the band last year.

For those interested ....Here are some companies that contribute large sums of money to the Trump campaign....just pure info!
Do with this whatever you like...or do nothing at all! 😊@Marvel@wwe@ufc@tacobell@Wendys@LLBean@MolsonCoors@newbalance@EsteeLauder

You know...im gettin more & more conflicted about these bitch sessions with all these crazed white supremacy fuckers & closet klansmen & even the MAGA cultists.

It’s like a strip club...it’s fun for a little while....but then it gets shitty. You just walk away feeling yucky. https://t.co/BEkMDg2SKf

I’ve always known that not all cops are bad.
But damn I never realized how many actually ARE.