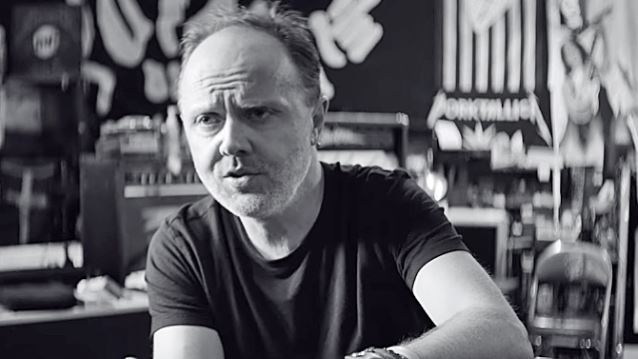 METALLICA drummer Lars Ulrich has spoken with Rolling Stone about the band's tenth studio album, "Hardwired...To Self-Destruct", which is due out on November 18. Ulrich stated about the lyrical themes covered on the record: "There's a lot of dark stuff about relationships. Not just with other people, but the hidden personalities within."

The album's opening number, "Hardwired", premiered last month, with the short, fast tune possibly setting the tone for the rest of the record. Ulrich said: "Most of the songs are simpler. We introduce a mood and we stick to it, rather than songs we've done where one riff happens and we go over here and then over there and becomes a journey through all these different soundscapes. The songs are more linear."

Ulrich said that the band was possibly inspired by revisiting its earliest albums, "Kill 'Em All" and "Ride The Lightning", while preparing reissues of them. He remarked: "It wasn't until 2013 when we played it [in its entirety at the Orion festival in Detroit] that I realized 'Kill 'Em All' had a cohesiveness… The songs are longer but not quite as progressive. It's a world all its own. And I think there are some elements of that that rubbed off into this. I'd say there's a trace of residue from rediscovering 'Kill 'Em All' that crept into the songwriting."

"Hardwired...To Self-Destruct" follows up 2008's "Death Magnetic" and will contain 12 new songs and 80 minutes of music over two discs. The set will also be available on vinyl, as a download and also in a deluxe edition.