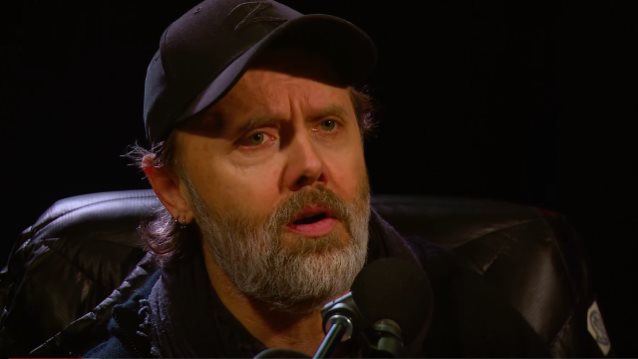 During a brand new interview with CBC Radio One's arts and culture program "Q", METALLICA drummer Lars Ulrich spoke about the issue of drummers and health, particularly after RUSH admitted that the Canadian rock trio's retirement from the road has happened, in large part, because of drummer Neil Peart's tendonitis and diminishing physical abilities.

"When people ask me to look into the crystal ball into the future: 'What do you think? Are you still gonna be playing…?'" Lars said (see video below). "It's the great, big unanswered question. Mentally, creatively, spiritually, aesthetically, we'll go for another hundred years [and] we're fine. Physically, obviously, it's the big question.

"I was at [the epic classic-rock summit] Desert Trip [in Indio, California with a lineup that included THE ROLLING STONES, Paul McCartney, Roger Waters, Bob Dylan and THE WHO], and there were these six acts on, and they were great, but there was one thing I did spot was the of the… And they're all apparently in their 70s; I didn't fact-check that, but that's what I was told. There was only one of the six acts that had the O.G. drummer. The other five acts had a drummer, like, in the 20s and the 30s, so that should tell you something, right? So only Charlie [Watts of THE ROLLING STONES] was there, and he's fabulous. I've seen THE STONES [something like] fifty times in the last couple of decades; they're great. But like Neil [Peart] was saying [Editor's note: Lars is referring to a recent comment from Peart where the RUSH drummer said his 'style of drumming is largely an athletic undertaking'], what he does is a little bit different. It's a little more in the jazz… A lot of jazz drummers, like Elvin Jones and Max Roach and Tony Williams, all these guys were still playing up in their 70s and 80s."

To help Lars and his bandmates prepare for the grueling nature of their live performances, METALLICA employs a staff of physical therapists, trainers and massage specialists on the road. Ulrich runs, stretches and does torso-strengthening exercises as a matter of course.

"Some of the hardest-working people on our team are a couple of guys that travel with us that stretch us out and sort of stitch us back together," Lars said. "Kirk [Hammett, guitar] is the one that does yoga. I get stretched and I get massaged. It's kind of like… Unfortunately, it's kind of like a sports team now. It's actually kind of pathetic. People come backstage [and ask], 'Where's the Jack Daniel's?' There's no Jack Daniel's. It's brown rice and nasty protein shakes and a couple of trainers that are stretching us and stitching us back together again after the show. But at least we're still playing, and at least we're still functioning, and at least it still has some of the weight that it used to. So, so far so good, so we'll see where it takes us."