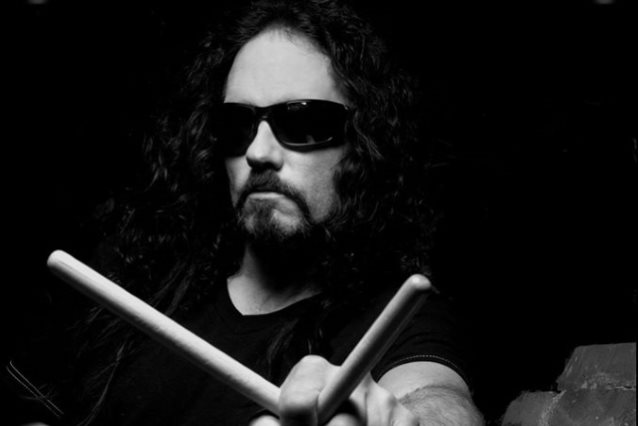 Late MEGADETH drummer Nick Menza's long-awaited book, "Megalife: Nick Menza The Book", will be released on November 4. The book, which was written with J. Marshall Craig, will include events immediately before and after the drummer's death. There are also plans for a Los Angeles memorial concert and fundraiser for Nick's young boys as well as a benefit show by MEGADETH, the band Nick was most recognized for.

Menza's mother, Rose, has expressed her "enormous gratitude for the outpouring of love and condolences from Nick's many friends and fans," adding that "we are so happy and excited Dave Mustaine has chosen to help celebrate Nick's life and help the boys."

Menza's art collection, "Influx", was released earlier today (Saturday, July 23) on what would have been the drummer's 52nd birthday. The artwork featured in the collection is part of a new medium of abstract art crafted from rhythm, where drummers are building fine art through the use of drumsticks that light much like a painter uses brushes with oils. There are a total of three different works within Menza's collection. Each work is available in editions of 100.

Menza is best known for his legendary work with MEGADETH during what many associate as the band's "classic" era. In recent years, he joined progressive rock/fusion group OHM:, which also features ex-MEGADETH guitarist Chris Poland.

On May 21, Nick collapsed after suffering a heart attack during a concert with OHM: at The Baked Potato in Studio City, California and was pronounced dead upon arrival at the hospital.