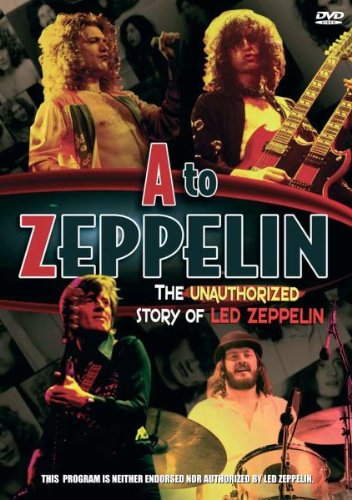 A LED ZEPPELIN DVD documentary, "A to Zeppelin: The Story of Led Zeppelin" (view cover here),will be released on June 8 through Koch Entertainment. Although the disc is not endorsed or authorized by the band and it does not contain any LED ZEPPELIN music, "it is fairly well produced and features recent interviews with some of those who were around the band during their heyday: J.J. Jackson, Richard Cole, Roy Harper, Simon Kirke, Andy Johns, Chris Dreja, Big Jim Sullivan, Carmine Appice and more," according to a posting at Led-Zeppelin.com. "A well-rounded bio touches upon some of the major events of ZEP's career, with some insight from the various guest interviews, including Elvis' right-hand-man Joe Esposito who briefly discusses when ZEP met the King.

"(Recent) footage takes us into Headley Grange, where some of their greatest masterpieces were recorded. As a bonus on the DVD, there's a photo gallery of some previously unseen live LED ZEPPELIN pics.

"We hear directly from the members of ZEP mainly through some audio interviews. There's very little ZEP footage included, but a rare short clip of a newly discovered Bonham / Plant TV interview from 1970 is included, making the DVD worthwhile even for hardcore collectors."