Legendary drummer brothers Carmine and Vinny Appice are recording their first-ever studio album together, to be released in October under the band name APPICE.

"After decades in this crazy music business, we will sit down for the first time and record songs together for an amazing new studio album," say Carmine and Vinny in a statement. "The album will feature both new songs and classic tracks from our history. This is very exciting for us as we will have, as Ringo said,'a little help from my/our friends.' With that in mind, the result will be great-sounding, spine-shaking rhythmic foundations, along with big, giant melodic guitars from hell, and on top, blazing vocals and melodies that will tear it all up! A first in a lifetime for us brothers!"

Carmine says: "I am so excited to be doing this new APPICE CD. It is always a challenge and fun doing music with Vinny. This CD is no exception and we will be doing cool songs with double drumming and lots ear candy for our fans, not to mention playing with some of our special friends. The recording process is coming out great. Cannot wait to finish and take it on the road! Heavy drums and heavy songs. It will kill!"

Vinny adds: "A studio album that was years in the making has now come to life! Our first ever studio CD together. With great songs, musicians and, of course, drums and rhythms that will overwhelm your ears and fascinate your mind!"

Olly Hahn, head of Steamhammer, says: "It's an honor to welcome these legendary drummers to the Steamhammer family. Be prepared for an album filled with great musicians and a lot of drum wars!!!"

The as-yet-untitled album will be released as a CD digipack, on double gatefold vinyl, download and stream.

Carmine Appice (OZZY OSBOURNE, ROD STEWART, VANILLA FUDGE, JEFF BECK, GUITAR ZEUS, KING KOBRA) has enjoyed an amazing 50-year career as a rock star, music educator, and rock pioneer. He is widely considered to be one of the most accomplished showmen in rock and is the recipient of numerous awards, including dozens of gold and platinum selling records. Carmine co-wrote such monster-selling hits as "Do Ya Think I'm Sexy" and "Young Turks". He has broken new ground in every aspect of his career as a performer, as a teacher, and as a writer, and he continues to inspire drummers and listeners throughout the world with his originality and his unwavering dedication to the art of drumming.

Vinny Appice has anchored the rhythm and power live and in the studio for the music of DIO, BLACK SABBATH, HEAVEN & HELL, WWIII, AXIS, Rick Derringer, John Lennon, and more. He has recorded and co-written songs on over 30 albums and CDs, including many multi-platinum records. Vinny's drumming can also be heard on numerous movie soundtracks, including "Wayne's World 2", "Heavy Metal", "Iron Eagle" and "Bedazzled". Vinny, the author of drum instruction book "Rock Steady" and DVD "Hard Rock Drumming Techniques", has performed incredible powerhouse drum clinics around the globe. Numerous books have been written about BLACK SABBATH and DIO with the authors always mentioned Vinny's unique powerful drumming style. 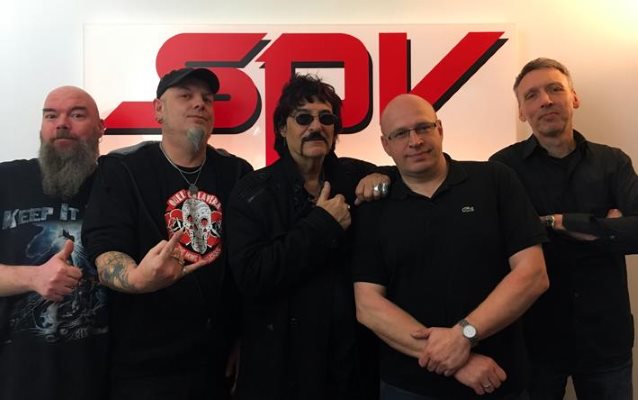