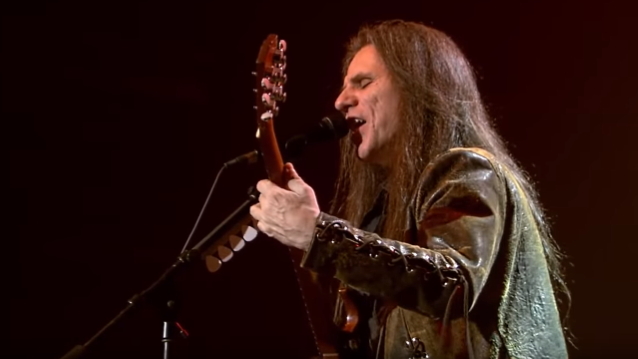 In a recent interview with The Metal Voice, Frank Marino spoke about the culture of "V.I.P Packages," which seems to be the only way for fans to meet the bands they admire these days. Some of these come at a really inflated price on top of the standard ticket costs and include anything from a signed item, a photo to watching soundchecks or a collectable lanyard.

"I won't do this, but from what I understand, a lot of the guys that I knew, now they're going out and they're selling tickets to meet them, which is ridiculous, because I spent my whole life meeting everybody before and after every show I've ever done — for free," the legendary Canadian guitarist and leader of the band MAHOGANY RUSH said (hear audio below). "You meet people — that's what you do, right? You finished your show, and you go and meet people, like you're a normal guy. But now they're selling this thing. And in the old days, you couldn't meet those guys even if you offered to pay them the money. And I'm thinking, what's the psychology behind that? Guys standing behind a rope line, being let in two at a time and sitting on your lap like you're Santa Claus. I find something screwy about that — that's weird. The agents that we were [using to book the tour] this time even suggested it to me. The agents said, 'And then we can add on the tickets for the meet-and-greet' and all that. And I was, like, 'No. What are you — nuts? I'm not gonna do that. That's really hokey.' 'Well, everybody's doing it. Everybody's doing it.' 'Yeah, but I'm not doing it.'"

He continued: "If somebody gives you a guest pass — some people do; they give it to you. 'Hey, here's a guest pass. Come back and meet Frank.' And they come back and meet [us]. But [they don't have] to pay for it. That's ridiculous. Listen, I meet people anyway — I always did; I always do. Anyone that knows me will tell you that. They say, 'Yeah, Frank is probably one of the most accessible guys in music.' I'm the guy that if I'm opening the show, when I'm finished, I go sit in the hall. So I'm that type of guy. As a matter of fact, a lot of people in other bands used to be upset I would do that if I was opening the show. Especially at festivals. They'd say, 'Why are you going out there?' And I'd say, 'I'm going there to watch the bands.' They'd say, 'You can't let the people see you and think you're just like them.' And I go, 'I am just like them. Why do you think you're not just like them?' Think about that. You don't think you're just like them. I think that's a bad thing. Think about the mentality that goes with the guy that would actually believe what he just said."

Paid meet-and-greets are becoming staples of the touring circuit and are seen by some artists as a necessary evil to survive nowadays. Other musicians object to meet-and-greets on moral grounds, believing they favor richer fans over poorer ones. Similarly, many people view the fact that groups charge fans to meet them as completely exploitative, since artists are usually aware that young admirers are prepared to pay any amount of money to see their favorite band, sometimes at their parents' expense.

Y&T frontman Dave Meniketti previously said he was completely opposed to fans paying for meet-and-greets, but recently offered a so-called "Sound Check Experience" at some of the band's shows. Meniketti's wife Jill, who manages Y&T, later explained that the move was necessitated by the fact that "touring has become ridiculously expensive," adding this was the only way "to help salvage touring." She said: "Charging for extras is what most bands must do now in order to afford to continue performing. It's just the state of the business."

This past summer, Marino released a new live DVD/Blu-ray titled "Live At The Agora Theatre". Recorded live at The Agora Theatre in Cleveland, Ohio in 2010, this six-hour live performance is now available and presented in an elegant box set which includes both the Blu-ray and DVD formats in each box. You will receive four discs (one Blu-ray1080HD Disc in its own separate case and a three-DVD 720SD set in its own separate case),a 180-page book that delivers an in-depth chronicle of Frank's journey, from his early beginnings right up to this performance, as well as being filled with pictures that span Marino's career. The last 20 chapters are written by Marino in his own words and invite the reader to share intimate details about Frank's experiences, the making of this project, his personal feelings and his outlook on his life and career. You have a front-row-seat to witness the awe-inspiring man himself in the highest quality picture and sound as never seen before, while he delivers an incredible 58 tracks, many of which were rarely, if ever, played live.