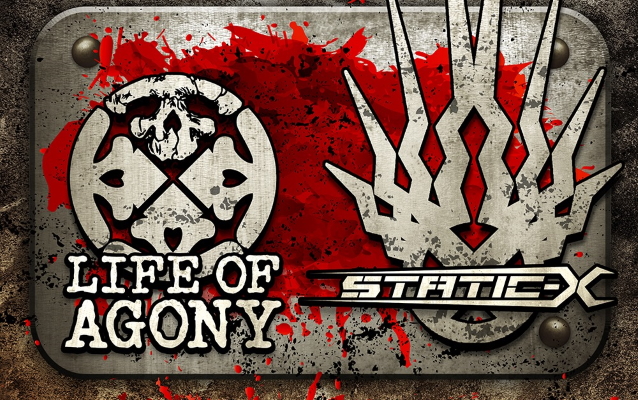 LIFE OF AGONY will team up with STATIC-X for a short European co-headlining tour in August 2020.

"The Agony & The X-Stasy" trek will kick off on August 4 in Budapest, Hungary and end of August 15 in Berlin, Germany.

LIFE OF AGONY's latest concept record, "The Sound Of Scars", was released on October 11 via Napalm. The disc acts as a "chapter two" to LIFE OF AGONY's iconic debut, "River Runs Red", which came out in 1993.

Hailed by Rolling Stone as "one of the greatest metal records of all time," "River Runs Red" was an emotional concept album that focused on a troubled teenager's inability to cope with what seemed to be the worst week of his life. The album connected to a broken generation in a visceral way through its cathartic message and hard-hitting approach, and the band developed a cult-following in the process.

Bassist Alan Robert said: "'The Sound Of Scars' feels like such a monumental moment in LIFE OF AGONY's story. On one hand, we've come full circle, continuing the concept of our 1993 debut 'River Runs Red', and on the other hand, we've reached new heights with the raw power of the sound and songwriting. We really cannot wait for fans to sink their teeth into this beast and take this emotional journey with us. This record is a monster."

Europe... It's Evil Disco Time!! We're headed your way with Life of Agony