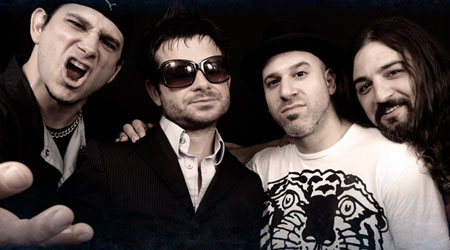 When asked about the current status of LIFE OF AGONY, Sal said, "We're not gonna play [anymore]. We moved out of our studio. We all kind of feel like we're at the end. We're never gonna make another record, because of those kinds of problems I was talking about [earlier in the interview] — we can't agree on writing a song. And Keith [Caputo, vocals] wants to pursue his life and his lifestyle. And that's pretty much the reason why also I've moved on and I'm doing my own thing… to just keep going; I didn't want my career to stop with LIFE OF AGONY. LIFE OF AGONY doesn't tour, LIFE OF AGONY doesn't do much. And so we were at a point where it was like… We did the last three shows in July [2011] and then we moved out of our studio, and that's it. I don't foresee anything in the future; I highly doubt it. I don't know how that would happen."

LIFE OF AGONY's transgender singer Mina Caputo, once known as Keith Caputo, spoke about the band's future plans during a radio interview last June. He said, "We realize that LIFE OF AGONY has become an extremely nostalgic act and the music that used to not be dated, in our eyes, is dated, and the whole situation is dated. It's a nostalgia, and we don't want to take advantage of that nostalgia anymore, nor do we wanna take advantage of the fans. We've got three shows [in July 2011] and it's probably gonna be the last shows that we do for a very long time. In fact, we just may call it quits. Because we feel like we set out to do what we needed to collectively. We're very honest people, we love each other dearly, but we just can't get it on; we can't turn each other on in the studio. We hit a brick wall together, and it ain't cool. So there's probably not gonna be a new [LIFE OF AGONY] album, nor a new single… So people better start getting used to [the 2005 album] 'Broken Valley', because that's probably the last piece of music that they'll hear from the band."

On April 3, 2010, I Scream Records recorded and filmed LIFE OF AGONY's performance at the Ancienne Belgique in Brussels, Belgium, the second show of the band's exclusive European "20 Years Strong" tour. The "20 Years Strong - River Runs Red: Live In Brussels" live album — which is a digipak combo release containing a CD of the entire concert as well as a DVD with a 10-camera production of the show, an on-the-road documentary and much more — was released on July 19 in Europe and July 27 in the USA.

LIFE OF AGONY played sporadic shows over the course of the last six years after completing its successful touring cycle for the 2005 Epic Records release, "Broken Valley".

Fan-filmed video footage of LIFE OF AGONY's performance at last year's Zwarte Cross (Black Cross) festival on July 17, 2011 in Lichtenvoorde, Holland can be seen below.

A PALE HORSE NAMED DEATH last year inked a worldwide recording deal with Steamhammer/SPV for the release of the group's debut album, "And Hell Will Follow Me".