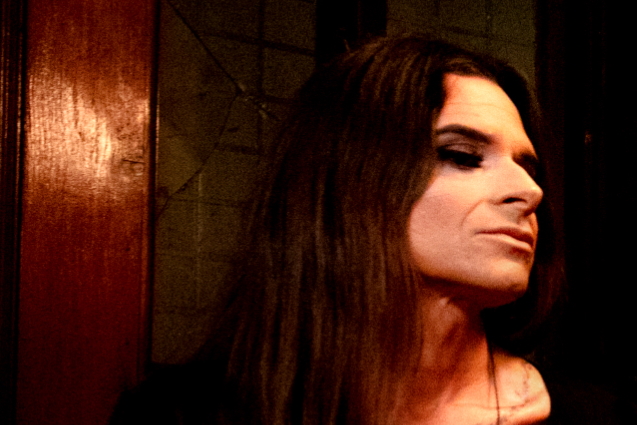 LIFE OF AGONY's MINA CAPUTO On Coronavirus Pandemic: 'I'm Not Buying Into The Fear'

LIFE OF AGONY singer Mina Caputo spoke to Cryptic Rock about how many musicians' careers are on hold with no money coming in as concerts and tours are canceled or postponed due to the coronavirus pandemic that is sweeping the globe.

"I'm talking to a lot of musicians and artists like Cristina [Scabbia] from LACUNA COIL and Alissa [White-Gluz] from ARCH ENEMY," Mina said. "We are talking every day, checking up on each other emotionally, because everyone's up and down and gutted. Everyone's sad and disappointed for the world, but we are all hoping that we can continue this journey. We'll see.

"I'm not buying into the fear," she continued. "They're spending billions on dividing the globe with fear. It's good to take precautions, but the common flu kills 700,000 people a year, vegetable oils kill more than million people a year, all the chem trails they are spraying are getting people sick and killing people year after year; it's probably not even charted. With all the pesticides they are spraying, even my dog suffers with severe allergies because of the shit they spray in the neighborhood. They are playing one big game — it is one big racket with us, it seems. Celebrities and athletes can be tested, but common and uncommon folk can't even get a test kit? They are playing with our morality. Look at the food companies, look at the pharmaceutical companies — they probably already have a cure.

"Anyway, this is just my speculation, and I don't believe 80% of what I hear and read. If you're an aware person with your consciousness scorching and on fire, you can absolutely see the pattern of how government plays with fear and humanity's emotions. It's what the media's all about: they're in the business of programming minds and culture. They've been doing this for thousands of years already in different ways. This is just another program, and honestly, I ain't buying it. I don't care about being quarantined because I have no social life anyway.

"Like I said, it's good to take precautions, but if you haven't been washing your hands, eating the right food, then you're a fucking idiot anyway. You shouldn't need a pandemic to straighten you out; you should already be taking care of yourself. I feel bad for the people in the families that have been affected, and I know it's a real thing, but I'm reading things all over. Some say it it started from a bat, some say it started in a lab. To be honest, I'm going the lab route because they're are many agendas on this planet.

"We should be focusing on real issues: stop brutalizing the planet and the people. That's all they're doing; they are brutalizing people with fear and people are falling for it. I feel bad for mass culture, they don't know what to believe. They hate themselves, that's why they hate people like me. They hate trans people, they hate anything different. They want everyone to be the same and like them — hating their miserable lives and not doing what they really want to do, believing in every little thing they hear on the television. Why do you think it's called a television? It tells you lies, it programs you into believing things that aren't true. They're disempowering culture. I don't buy it.

LIFE OF AGONY's latest concept record, "The Sound Of Scars", was released in October via Napalm. The disc acts as a "chapter two" to LIFE OF AGONY's iconic debut, "River Runs Red", which came out in 1993.

Hailed by Rolling Stone as "one of the greatest metal records of all time," "River Runs Red" was an emotional concept album that focused on a troubled teenager's inability to cope with what seemed to be the worst week of his life. The album connected to a broken generation in a visceral way through its cathartic message and hard-hitting approach, and the band developed a cult-following in the process.

2017's "A Place Where There's No More Pain" was LIFE OF AGONY's first release since Mina — formerly known as Keith Caputo — came out as transgender in 2011.