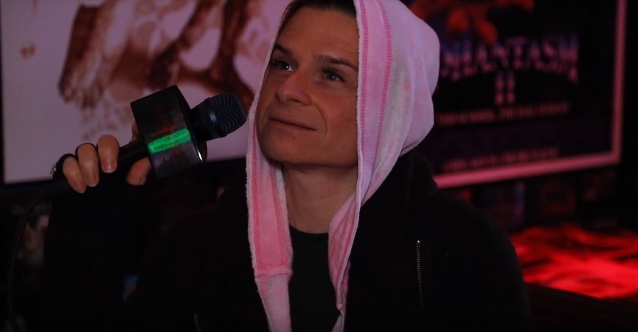 LIFE OF AGONY's MINA CAPUTO Rails Against Music Industry, Says Being In A Band Is 'More Difficult' Than A 9-To-5 Job

Derek Soto of Bloodlines recently conducted an interview with LIFE OF AGONY frontwoman Mina Caputo. You can watch the entire chat below. A few excerpts follow (transcribed by BLABBERMOUTH.NET).

Mina: "We became LIFE OF AGONY before we were kind of initiated in some sort of scene in the streets of New York. We really never set out to be a part of any 'scene' or didn't even really known a 'scene' existed because we were all so young. I was 14 years old when I started LIFE OF AGONY. There was a good five-, ten-year run before anyone even had LIFE OF AGONY roll out of their mouth at that point."

On whether any material on the band's 2017 "A Place Where There's No More Pain" was written between their previous studio album, 2005's "Broken Valley":

Mina: "Joey's [Z, guitar] has known Veronica for many, many years and she was one of the first names to come up. We've had many drummers that immediately wanted the slot, of course, but I think Veronica was like an impeccable pick, not only for her talents, because not only can she kill on the drums, but she's a great vocalist, she's a great guitar player, bass player. It works hand in hand. But what are we looking for? Peace and harmony. Fun. Talent. Femininity. More balance. You got two guys, you got a half-and-half, then you got a genetic female, so there's major, there's ROYGBIV going on in the band and there's major unity and harmony and it works very well. The balance of the guys, then, of course, because my soul and my whole biology is more feminine, so me and Veronica we naturally gravitate toward one another. There's that kind of thing, so it's kind of like a good Voltron. Yeah, we got peace, harmony, balance, love, compassion, fun. We're a full package now."

On the aspects of being in LIFE OF AGONY:

Mina: "People have no fucking idea about this business. No idea about what it means to be in a band. Everyone thinks it's a great, great time all the time. It's more difficult than the 9-to-5 is, and the law of average, the 9-to-5 people, it's almost like you guys get to fucking unplug. We never unplug. When you're working to creatively fulfill your passions, it's a very difficult lifestyle. A particular breed… You need to be designed biologically to be doing what we do. It's very difficult."

On how the "harmonious balance" within LIFE OF AGONY translates onstage:

Mina: "I think it translates wonderfully. We're having such an amazing time. There's no push-and-pull, no power struggles anymore. Everyone is on the same page. For the same reason, for fun, to heal ourselves and to heal each and every individual that showed up and bought a ticket and has come for healing through the music, you know? That's why we do it, really. That's why I do it. I do it because first and foremost, music to me, creating it, living it, expressing it, sharing it, it's like I'm a plant doctor. I'm my own, it's a shamanistic thing, at least for me, it's a very sacred, religious, sensual thing, music. Writing it, sharing it, touching lives, clearing out clogged arteries for people. It's like you got to be a martyr. I look at it that way because I am, in a sense, metaphorically speaking. I don't mind being the Christ. I don't mind being blamed. I don't mind being poked fun at. I have a beautiful life. People can say what they want, how they want it. I'm so confident and sure and secure within my own securities and insecurities that I can't be broken anymore. I cannot be broken ever, ever again."

On what her "Big Four" bands of hardcore would be and whether she'd like to see them tour together:

Mina: "BAD BRAINS, the original CRO-MAGS lineup, but that will never happen because the ego is just vibrating too much in that situation, I guess. BAD BRAINS, CRO-MAGS, which will never happen…I'd want to say QUICKSAND, but, to me, QUICKSAND is not hardcore. People want to mislabel shit. They're a lot more progressive. Hardcore, for example, Walter [Schreifels] is all over the GORILLA BISCUITS 'Start Today' album. That is a perfect hardcore record to me. That is the definition of the 'hardcore sound,' that album. To me, CRO-MAGS 'The Age Of Quarrel' is kind of even beyond that hardcore thing. It's more progressive in a sense. It's more…I don't know. Because they're great guys and I love them, I'd say SICK OF IT ALL. But when you say hardcore, I think of bands like TOKEN ENTRY. I think of bands like SLAPSTICK. I think of bands like BOLD. That's the real-deal shit. I don't know anything right now today."

LIFE OF AGONY will enter the studio in February to begin recording its new album for a tentative late 2019 release. The disc will be the band's first since the addition of Bellino, who replaced Sal Abruscato earlier this year.

"A Place Where There's No More Pain" was issued in April 2017 via Napalm. LIFE OF AGONY's fifth studio LP marked the band's first release since Mina (formerly known as Keith Caputo) came out as transgender in 2011.