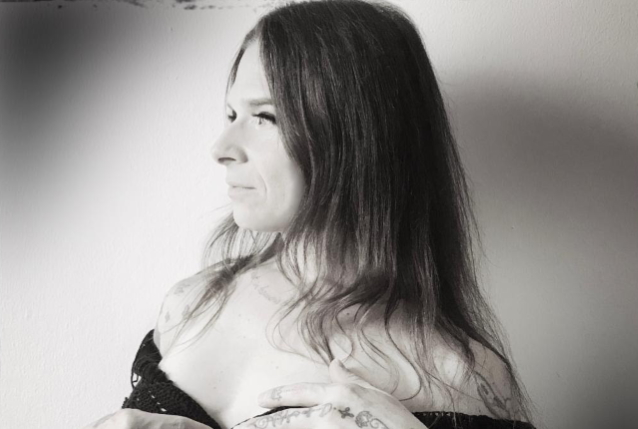 LIFE OF AGONY singer Mina Caputo has released a new solo album, titled "The Mones". Fans can check out the new record exclusively via Caputo's Bandcamp.

After garnering a massive following as the vocalist for the world-renowned rock-alt/metal outfit LIFE OF AGONY, Caputo's honed a reputation for touching listeners to the very depths of their souls with her poetry; her heartrending live performances are well-earned. Within a single show, she is capable of inciting arena-sized mosh pits in addition to breathless silence.

Throughout the last twenty years, Mina has recorded sixteen diversely influential albums — not including demos, live records or EPs — with an impressive who's who of industry veterans. On the festival circuit, she has shared stages with multitudes of varying genre titans, among them COLDPLAY, NINE INCH NAILS, Björk, David Bowie, PIXIES, VELVET REVOLVER, BUSH, SLIPKNOT, RED HOT CHILI PEPPERS, Laura Jane Grace, MODEST MOUSE, APHEX TWIN, FOO FIGHTERS, and more. With distinctive influences ranging from LED ZEPPELIN and THE DOORS to Arthur Rimbaud and William S. Burroughs, Mina is unafraid to mine new musical territory, as evidenced by her most recent releases, "A Fondness For Hometown Scars", "As Much Truth As One Can Bear", "Love Hard" and her 2020 release "The Mones".

Mina also has frequently co-collaborated with Grammy-nominated multi-instrumentalist producer Andy Kravitz (CYPRESS HILL, Billy Joel, Imogen Heap, Julianna Hatfield),whom she met during the LIFE OF AGONY "Soul Searching Sun" recording sessions in the late 1990s. Kravitz co-produced and was heavily present on her last three albums, "Love Hard", "As Much Truth As One Can Bear" and now "The Mones", which also features such guests as John (Norwood) Fisher (FISHBONE),Rick Boston (Joe Cocker) and longtime frequent collaborator Rob Mastrianni. Kravitz was also involved on her ambient-infused rock fusion duo side project with Ryan Oldcastle as THE NEPTUNE DARLINGS, bringing their two releases, "Chestnuts And Fireflies" and "Principium Sequentia".

Obsessed with hard truths, Caputo remains an intrepid conquistador of her own pain. Orphaned by heroin-addicted parents, Mina was forced to grow up in a dark world of poverty, violence and crime. And while themes of abuse and abandonment may seem familiar to those who follow her work, Caputo innovatively sheds new light on these subjects with every song she creates. As unorthodox as her lyrical content can sometimes be, the most surprising aspect about Mina is her undying romanticism — her unwavering insistence on seeing the silver lining in every cloud. As Caputo herself says: "From my own feelings of displacement, dissatisfaction and yearning comes a vast sea of compassion."

LIFE OF AGONY's latest concept record, "The Sound Of Scars", was released in October 2019 via Napalm. The disc acts as a "chapter two" to LIFE OF AGONY's iconic debut, "River Runs Red", which came out in 1993.

2017's "A Place Where There's No More Pain" was LIFE OF AGONY's first release since Mina — formerly known as Keith Caputo — came out as transgender in 2011.