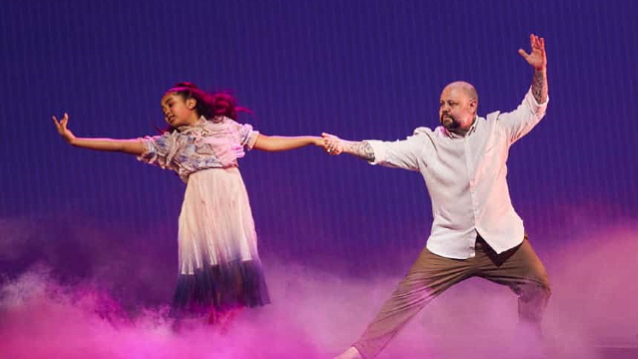 LIMP BIZKIT drummer John Otto and his daughter Ava Otto are the contestants on the reality dance show "Come Dance With Me".

Grammy Award-winning songwriter Philip Lawrence hosts the family dancing competition, which made its debut on CBS this past Friday, April 15.

According to CBS, the show "features exceptionally talented young dancers from across the country who invite one untrained family member who has supported their dance dreams to be their partner for a chance to strut their stuff for a grand prize."

Judges of the competition include one of Hollywood's most prolific dancer and actresses Jenna Dewan; professional celebrity dancer Dexter Mayfield; and renowned hip-hop choreographer Tricia Miranda.

Throughout the season, each duo will learn and perform different styles of dance, from hip hop and ballroom to contemporary and theatrical, among others.

At the age of 11, Ava Otto has already achieved important titles, prizes, and scholarships in the dance industry, as well as appearing in movies and modeling campaigns and serving as an outspoken hero for other young girls who have been bullied.

Speaking to Celebrity Page about the "Come Dance With Me" experience, Ava said: "I was a bit on the bossy side. I like having control. It was very nice." John added: "I just [tried to] keep it one foot in front of the other and just worried about not trying to embarrass her, let alone embarrass myself — I already embarrassed myself." Ava countered: "You were great, you didn't embarrass me. I am so thankful for anyone who is supporting us. It was a big step for the both of us so it's really great knowing that people are supporting us from everywhere."

According to TVLine, the two-hour premiere of "Come Dance With Me" averaged barely two million viewers and just a 0.2 demo rating. However, the site cautions that the live and same-day numbers reported in its ratings column do not reflect a show's overall performance, given the increased use of delayed playback via DVR and streaming platforms, plus out-of-home viewing.

You can watch the first full episode of "Come Dance With Me" at CBS.com.

Last year, John launched his very own online music school where his lessons cater to all levels, from novice drummers to experts.