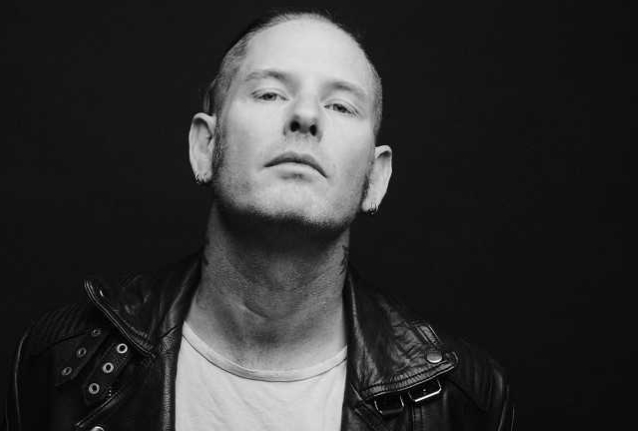 This past Thursday (September 29),SLIPKNOT frontman Corey Taylor answered questions posed by schoolchildren for an appearance on BBC Sounds with host Craig Charles.

When one child asked whether SLIPKNOT has songs that change time signatures, Taylor replied: "'Vermillion' [2004] is actually a song that goes from three-four into four-four and kind of back and forth. I think there's a section in there that goes from three-four to seven-eight, actually, which is very weird. It all kind of ties together with a riff that could go either way. And it allows us to kind of flow back and forth between them."

Asked by another child how he became a musician, Taylor replied: "It all started with singing when I was about 10 years old. And I realized that I could pick up a guitar and I could find the notes that were being played on the song that I was listening to, which I then realized that I had what is called pitch. It's not perfect pitch, but it's darn close… I taught myself how to play guitar, so I could write songs… then it was just a matter of getting people together to jam and have fun and dance. The rest is history. But it all stemmed from me just loving to sing, and loving to sing along to stuff that I liked."

Asked by a third child what inspired him, Taylor said: "Oh, man. Everything, really. I mean, life in general is the biggest influence you could ever have. There's so many things that, if you look around with the right kind of eyes, you can find inspiration, no matter what it is. The beautiful thing about music is that it's limitless. It has no end. All it needs is a beginning."

Taylor's entire chat with the 10- and 11-year-olds can be heard at this location.

SLIPKNOT's latest studio album, "The End, So Far", was released on Friday, September 30 via Roadrunner Records. The follow-up to 2019's "We Are Not Your Kind", it is the band's final record with Roadrunner after first signing with the rock and metal label in 1998.

Last week, Corey announced a very special livestream event, "Half Sold Out: CMFT Live At The Palladium", which is set to broadcast from the world-renowned London venue on October 17. The sold-out London Palladium show, also featuring THE CHERRY BOMBS, will be a benefit event for The Taylor Foundation, Corey's charity that supports and uplifts military veterans, emergency personnel and their families, living with post-traumatic stress disorder (PTSD). The intimate and special evening is the first date of Corey's first-ever U.K. solo band tour, which also includes sold-out shows in Manchester, Hull and Swansea.