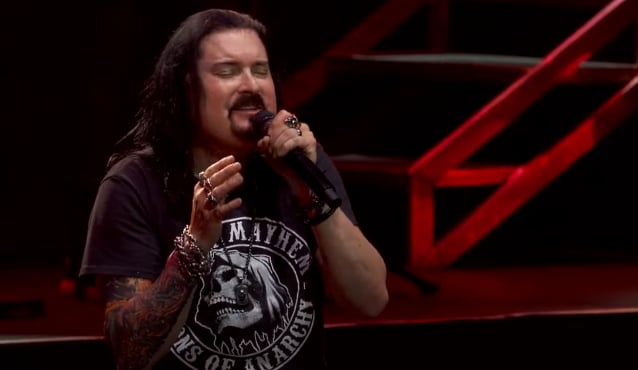 DREAM THEATER's official YouTube channel has uploaded the band's cover of the holiday classic "O Holy Night". The track was recorded during a soundcheck at the Roseland Theater in Portland, Oregon on June 9, 1993 and was released three years later on a very rare fan-club-only Christmas CD.

Last year, DREAM THEATER released a medley of holiday classics called "The Holiday Spirit Carries On". The proceeds of the song, which was made available via Bandcamp, went to support the band's road crew which was unable to work in 2020 due to the coronavirus pandemic.

DREAM THEATER — comprised of Petrucci, singer James LaBrie, Jordan Rudess, John Myung and Mike Mangini — was in the middle of a sold-out world tour in support of its 2019 last release "Distance Over Time" and the 20th anniversary of "Scenes From A Memory" when a global pandemic brought the world to a stop. The musicians found themselves at home, with LaBrie in Canada and the rest of the group in the States. As fate would have it, they'd just finished construction on DTHQ (Dream Theater Headquarters) — a combination live recording studio, rehearsal space, control room, equipment storage, and creative hive. With LaBrie in Canada, he initially wrote with the band via Zoom on a monitor in DTHQ. In March 2021, he flew down to New York, quarantined, and recorded his vocals face to face with Petrucci.