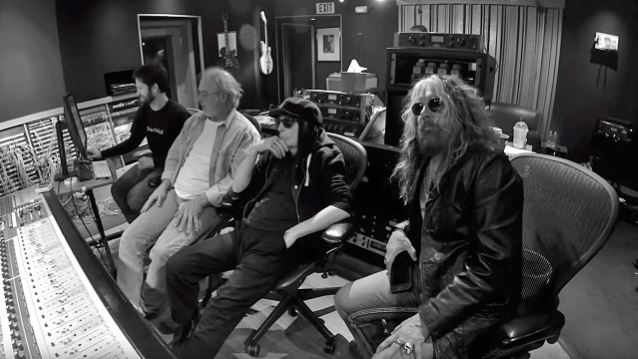 Mars previously posted a couple of photos from Blackbird on his Facebook page and wrote: "What a great great time I'm having creating new, fresh, greasy LOUD-ASS, slamming music."

During a March 2014 appearance on Eddie Trunk's show "Trunk Nation" on SiriusXM's Hair Nation, Mars stated about his solo plans: "I can honestly say that I am going to release at least an EP. As far as a whole album right now, I won't release a whole album 'till I think every single one of my songs is an 'A' song. And I've got a shitload of songs, and they're all 'B' songs, 'C' songs… I'll give them to, like, baby bands coming up, TV commercials, movies, soundtracks, whatever the heck, but I will not put them on my record until I believe in my heart that they're 'A' songs, that when you hear them, you have to have all of them. You know what I mean? No fillers. If I hear a filler in there or anything I think is a filler? No. But then, who am I to judge? Then you release singles."

He continued: "I have about six songs… I mean, I have way, way more than that, but they're all, like… to me, they don't matter. They're laying there. I mean, stacks. And I have a studio in my house, of course, and I go down there almost every day. And just in the past week or so, I've written six new songs which I believe are pretty much on their way to being 'A' songs. But I just need someone to come in and help me, not arrange, by any means… I know what I'm hearing and I know what I wanna hear. It's, like, [I need] a guy to help me [lay vocals on top of it]… 'cause I'm not a singer."

Asked what he planned on doing after MÖTLEY CRÜE retired from touring, Mars told Edmonton, Alberta, Canada's 100.3 The Bear radio station: "A solo record. People have been asking me for that for years and years and years. And 'Why hasn't Mick written a book?' So that, of course, is gonna be in the works. I haven't started anything or figured out who I want to write with me, or help me write it. But doing that kind of a thing. Putting together, probably, a cool band with some cool friends of mine and stuff, and going out and doing some… you know, a few weeks here and a few weeks there, touring… but not as the MICK MARS BAND; I won't do that. [Laughs] You'll see, like, a name, and you'll go, 'Hey, who's that?' 'I don't know' That's the name of the band."

In a September 2012 interview with Jacky Bam Bam of the 93.3 WMMR radio station in Philadelphia, Pennsylvania, Mars spoke about his long-rumored solo album of R&B, soul, and blues songs, which he had asked American R&B and soul singer-songwriter Macy Gray to guest on. "I would love to have Macy Gray sing stuff for me," he said. "What I have in mind is not like your shuffle beat kind of blues, it's more of an Etta James kind of blues. If you listen to the first Paul Butterfield album, with Sam Lay playing drums, there's not a shuffle in it. He takes the drums and he does a whole different thing with them. I want lots of movement in the rhythm, so you can't help but move. Like a Macy Gray voice on it, or Andy Garcia — people like that are, to me, they're fabulous singers. Not that I wanna do a hodgepodge of singers and stuff, but to [have them] guest on a couple of songs would be very cool."

In another 2012 interview, Mars stated about MÖTLEY CRÜE's 1994 self-titled album: "I thought that was probably… To me, and I can only speak for me, I think that was probably the best album we've done. Musical-wise, the songs, I felt, were strong. And just musically, to me, it was, I guess, my BEATLES 'White Album'; that's kind of how I feel about that one. I'm not saying that any of my other albums are crummy or anything like that — I love every album that we did — but that one just has a special thing for me."

MÖTLEY CRÜE drummer Tommy Lee echoed Mick's sentiments, telling Australia's Beat about the CD: "It's huge. Honestly, dude, it's one of my favorite CRÜE records. Sonically, the songs and the playing on that record is gnarly. We worked our asses off on that record. We had so much to prove: Vince was gone, we had a new singer who also plays guitar and writes and he brought a whole new element to this. But once fans are used to a certain thing, they just didn't want to know about any other version of MÖTLEY CRÜE. That's understandable, but when you break it down, that record still sounds rad today."