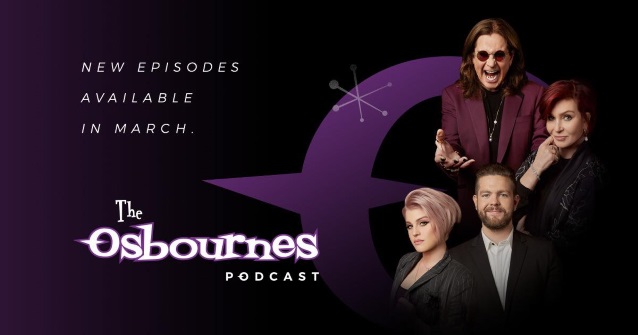 Listen To Full Seventh Episode Of 'The Osbournes' Podcast

Ozzy Osbourne and his family have released the seventh episode of their new podcast. You can now listen to it using the widget below.

According to The Hollywood Reporter, the 10-week podcast sees Ozzy, his wife/manager Sharon and their children Jack and Kelly talking about the groundbreaking reality show "The Osbournes" that ran on MTV from 2002 to 2005. Several guests will make an appearance on the show, including comedian Carnie Wilson and "The Osbournes" executive producer Greg Johnston.

Synopsis of Episode 7: "Ross Halfin is a legend of rock and roll photography. He covered the punk bands of the '70s like THE CLASH, THE JAM and the SEX PISTOLS before making his way across the Atlantic to include rockers such as AC/DC, RUSH and BLACK SABBATH. His unique, forward approach to his subjects coupled with his ability to capture the most electrifying moments made him the go-to tour photographer for acts like METALLICA, MÖTLEY CRÜE and Ozzy Osbourne. Now a close personal friend of the Osbourne family, Ross links up with the family to discuss his big break, the highs, and lows of rock photography and the most pleasant and unpleasant people to work within the biz."