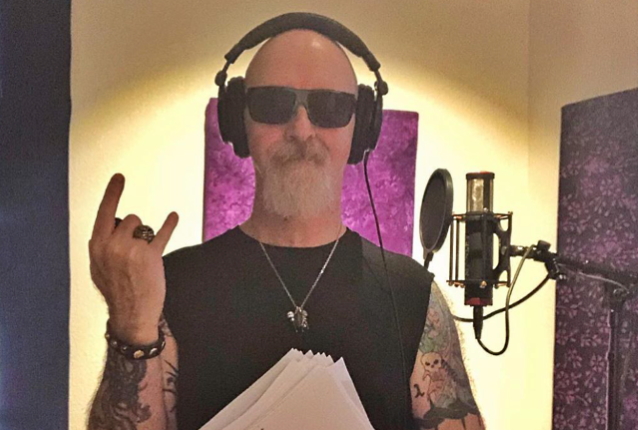 An excerpt from the audiobook version of JUDAS PRIEST frontman Rob Halford's upcoming autobiography, "Confess", can be heard using the SoundCloud widget below.

"Confess" will arrive on September 29 via Hachette Books. Pre-orders are now available at Amazon.

On August 5, Halford shared a photo of him in a recording booth, and he captioned it: "'Confess audio book recording done and dusted!'(preorder available now at all major online sites and bookstores)"

Known as "The Metal God" by his devoted, global fan base, Halford has always subverted the norm, and "Confess" will offer readers a compelling, heartfelt and honest look at the struggles Rob has faced with addiction and his sexuality as well as exploring his music and his many brushes with controversy.

Headline Publishing's publishing director Sarah Emsley, who acquired world rights from Dave Daniel at CSA for "Confess", said: "I have a real passion for warts-and-all, career-spanning autobiographies from icons of the music world and Rob Halford's story is truly incredible. Covering seven action-packed decades, the early material from 'Confess' is stunning. We cannot wait to publish Rob's book around the globe."

"The book isn't even out yet, and I think about it nearly every day," he continued. "I have to find a commonplace, because I am exposing parts of my life, which some people will be quite shocked. That's not my intent.

"Quite frankly, if I weren't feeling that way, I would think there is something wrong with me.

"I'm a very emotional person. I'm still trying to find a settled place. That is why these interviews are good for me, as I can talk things out. Talking and communication are so vital to us in life, especially when we are trying to figure things out."