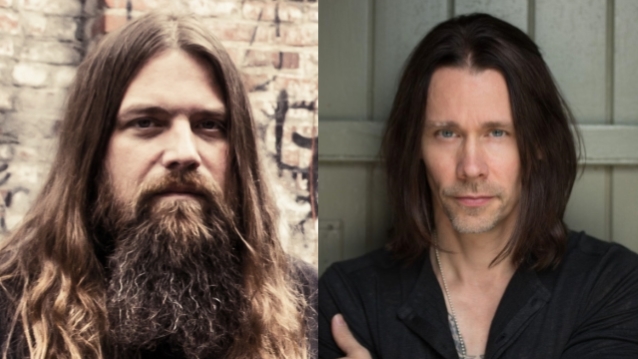 Mark told Kerrang! magazine about "Save Defiance": "Myles Kennedy is a super-talented musician. I don't think people realize what a great guitar player he is, as well as having that amazing voice. He was so cool and professional about the whole process and really easy to work with. He's another one who came instantly into our minds when thinking about which singers would be right. Myles wrote the lyrics and had been asking me what kind of things I wanted. I had to just tell him, 'Do what you do. That's why we want you on the track.'That's what I love about collaborating musically."

"Having the opportunity to work with Mark was a really cool experience," Kennedy said. "I'd been a fan of his work with LAMB OF GOD for a long time so I was honored when he asked if I wanted to sing on his record. Mark did a great job creating a track that would be inspiring for me to sing over. The first time I heard the music, a melody and lyric popped into my head. The creative process felt pretty effortless. I am really happy with how the song turned out overall."

"Anesthetic" was made alongside a dream team of highly respected musicians from a multitude of musical worlds; some friends and some who would never be expected to collaborate with metal genre leaders LAMB OF GOD.