"They Don't Want What We Want (And They Don't Care)", the new single from ASKING ALEXANDRIA, can be streamed below. The song is expected to appear on the band's next album, due later in the year via Sumerian Records.

Guitarist Ben Bruce says: "We are back and we are back in the biggest way! Our new song 'They Don't Want What We Want (And They Don't Care)' is non-stop energy! Some of Danny's catchiest vocals, one of the biggest guitar riffs I've ever written and some of James's best drumming all thrown into one big melting pot. We cannot wait to play this song live! We are super proud to be flying the rock flag high on this one. Let's bang those fucking heads and sing along at the top of our lungs!"

Last December, ASKING ALEXANDRIA singer Danny Worsnop confirmed to Australia's Heavy that the band had completed work on its new LP. "We spent the last few months in and out of the studio, in between tours, writing and recording," he said. "[Guitarist] Ben [Bruce] and I basically locked ourselves away and put together a collection of songs that define where we're at as musicians and as artists and as people. I think it's by far the strongest material that we've [written]."

Last July, ASKING ALEXANDRIA released a new single called "The Violence", along with an accompanying seven-minute short film written and directed by Jensen Noen and presented by Scissor Films and Sumerian Films.

At the time, Bruce said that the song "encompasses everything we have been working towards: huge guitars, anthemic drums and some of the catchiest, most technically accomplished vocals that Danny has ever delivered, and this is only just the beginning."

Worsnop added that "The Violence" was "an incredibly rewarding song to create. Ben and I both got to go way outside anything we'd done before and create something fresh and engaging.

"Thematically, the song is about the way mainstream media and politicians manipulate and spread mistruth amongst the people to encourage and create anger, fear, division, and conflict in their quest to control and acquire power," he revealed. "As the history books have shown, this only goes so far before the people stand up and say enough is enough."

ASKING ALEXANDRIA recently announced the "Like A House On Fire" U.S. headline tour with special guests FALLING IN REVERSE, WAGE WAR and HYRO THE HERO. The trek will kick off on Thursday, April 30 in Phoenix, Arizona and will hit a further 21 stops before ending in Minneapolis, Minnesota on Sunday, May 31.

Last December, ASKING ALEXANDRIA released a deluxe version of its phenomenally successful self-titled album. The release, titled "LP5 DLX", celebrated the second anniversary of the release of "Asking Alexandria" and featured six bonus tracks. Previously unheard gems such as a full-band version of hit single "Vultures", the original demo of "Rise Up", a Hyro The Hero mash-up of "Where Did It Go" and a Dex Luthor remix of "Alone In A Room" accompanied the additions of the acoustic version of "Alone In A Room" and the band's rendition of "Perfect" taken from ASKING ALEXANDRIA's live session at SiriusXM. 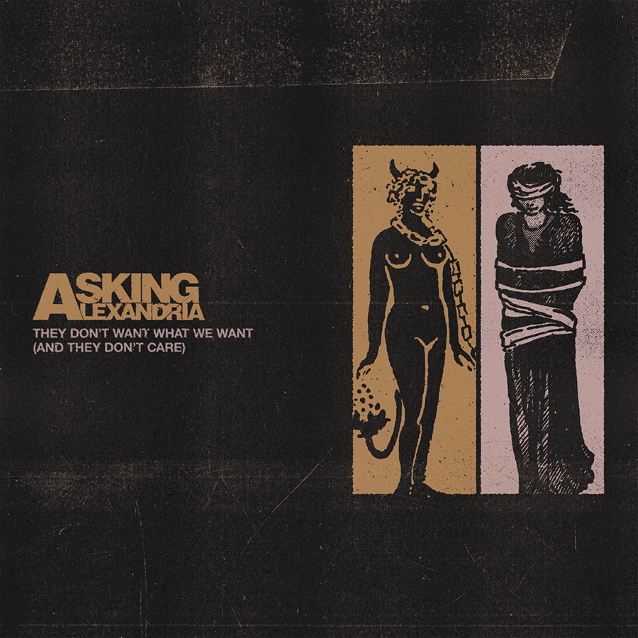