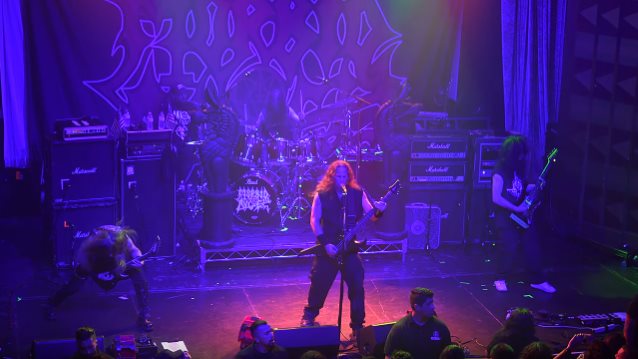 "Piles Of Little Arms", a brand new song from death metal veterans MORBID ANGEL, can be streamed below. The track is taken from the band's new album, "Kingdoms Disdained", which will be released on December 1 via Silver Lining Music (JVC in Japan). Recorded at Mana Recording in St. Petersburg, Florida with producer — and former MORBID ANGEL guitarist — Erik Rutan, the LP marks the band's first release with drummer Scott Fuller (ANNIHILATED, ex-ABYSMAL DAWN) who joined MORBID ANGEL last year following the departure of Tim Yeung. It is also be MORBID ANGEL's first album to feature bassist/vocalist Steve Tucker since 2003's "Heretic".

"Kingdoms Disdained" will include the song "Paradigms Warped", which MORBID ANGEL performed live on its recent U.S. tour.

"Kingdoms Disdained" will be available in CD (jewel case and digipack with lenticular cover),180-gram vinyl in a gatefold, and digital download. Those who pre-order will receive an immediate download of "Piles Of Little Arms". A special edition boxset will be available for pre-order shortly.

"The album title says it all," states Tucker. "Everybody's fed up and nobody can figure out how to fix it. We've got all these miniature wars in neighborhoods, cities, countries, and we've got people with varying opinions causing chaos, yet everyone is doing what they feel is right. Which all makes it feels like the world has reached a point of utter madness and confusion."

Tucker, who is back for his third spell with the group, told "The Metal Magdalene With Jet" show about MORBID ANGEL's approach on the upcoming album: "It was really just about writing music — it was just about writing a MORBID ANGEL album. Nobody said, 'Hey, we wanna go in this direction,' nobody said anything. I mean, there's obvious things there. I've said it before — I'm a death metal guy, so, for me, it's gonna be a death metal album; if I'm on it, it's death metal. So it was just about making a MORBID ANGEL album. It was really about coming in with something new, something fresh, but yet it still being MORBID ANGEL. Really, honestly, we didn't approach this any differently than any of the other albums I was involved in except for maybe [1998's] 'Formulas Fatal To The Flesh', which 'Formulas', Trey [Azagthoth, guitar] wrote all the music, all the lyrics and things like that. But this was done more similar to maybe [2000's] 'Gateways To Annihilation', where everybody had their contribution. Trey wrote a bunch of songs, I wrote songs, Scotty contributed some ideas. There was a lot of back-and-forth. In the end, it has to become a MORBID ANGEL song. And at this point, I feel that it's very much a MORBID ANGEL album."

MORBID ANGEL in January announced the addition of Dan Vadim Von (guitarist/frontman of the American death metal band VADIMVON) to the band's lineup on second guitar. He joined the group as the replacement for Norwegian guitarist Destructhor (a.k.a. Thor Anders Myhren),who left the band two years ago.