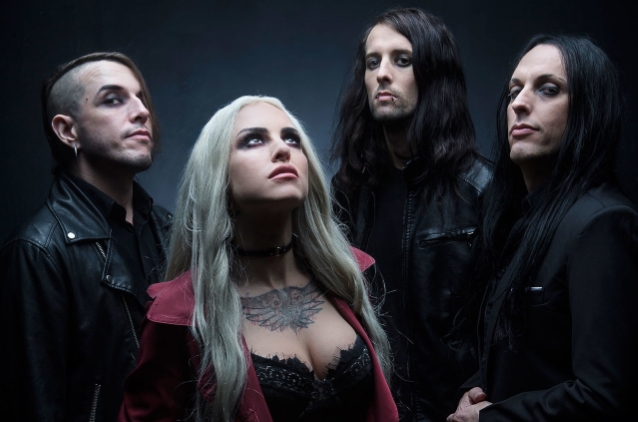 STITCHED UP HEART has just released a new track, "Warrior". The song will appear on the band's forthcoming full-length album, "Darkness", due out in the spring 2020 via RED Music. The 13-song follow-up to 2016's "Never Alone" was produced by produced by Matt Good of FROM FIRST TO LAST and D.R.U.G.S.

"This song is dedicated to the soldiers who sacrifice everything to protect the ones they love," states STITCHED UP HEART frontwoman Alecia "Mixi" Demner. "To those who have seen things they can never come back from. To those who will defend no matter what the cost."

In support of the release of "Warrior", the band is partnering up with Guitars For Vets, a non-profit/charity, by selling a "Warrior" t-shirt. The t-shirts are available for purchase here.

"Guitars For Vets is proud to partner with RED Music and STITCHED UP HEART to help bring awareness to the physical, emotional and spiritual challenges that our veterans face as a result of their service for us," co-founder of the organization Patrick Nettesheim states about the partnership. "We applaud STITCHED UP HEART for bringing the healing power of music to their fans and beyond as we welcome them to the team as G4V Ambassadors."

STITCHED UP HEART recently announced that it will join STEEL PANTHER as direct support on a North American tour.

STITCHED UP HEART plans to release one new song each month until "Darkness" arrives next year. Demner told Loudwire: "It's gonna be a little unique for the rock community, because it's not gonna be the way that albums are usually released. We're gonna try something kind of a little different to give people music consistently, like an every month you get a new song kind of thing."

Demner added: "I'm really excited about how it's gonna roll out. We're just trying something new, I think that with streaming and everything that's going on, this might actually help."

Demner added that the band's new LP is finished, mixed and mastered, saying that the group recorded some 70 songs for the project. She was not sure whether the unused tracks will appear on future releases or not.

Demner performed as a vocalist in various bands before starting STITCHED UP HEART in 2010. She told Spokesman.com that her influences are appropriately and wildly eclectic: PANTERA, GLASSJAW, DEFTONES, Louis Armstrong.