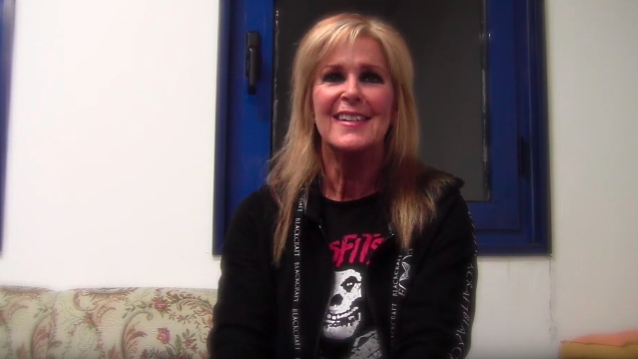 Lita Ford says that she is "surprised" Ozzy Osbourne has made it this long without more serious health issue in his life.

Ford made the comment when she was informed by Barbara Caserta of Italy's Linea Rock about Ozzy's Parkinson's disease diagnosis, a few days after the BLACK SABBATH singer went public with his battle with the progressive neurological condition.

Lita said (see video below): "I'm surprised he's made it this long, with nothing. He's had a good life. I don't know that his life is over right now, but Parkinson's is pretty hardcore. All the plastic surgery and all the drugs and the alcohol and all the shit that he's put in his body…"

She continued: "We all love Ozzy, and we don't wanna see him sick. But, for God's sakes, when you're snorting ants and stuff, it might leave you a little messed up later in life. I don't know. But I'm not surprised."

Ford also offered an update on her long-awaited new studio album, which is tentatively due this spring. The follow-up to 2012's "Living Like A Runaway" was once again helmed by guitarist/producer Gary Hoey, who contributes some guitar playing to the disc, alongside the rest of Ford's backing band, which continues to consist of guitarist Patrick Kennison, drummer Bobby Rock and bassist Marty O'Brien.

"I'm really in love with the new record, [which] nobody has heard yet," she said. "We've been working on it for a long time. And I hope to get it out soon — really soon. We're gonna start [by hitting the road] with Alice Cooper in the United States, and we hope to get it out right around the beginning of that tour."

Ozzy had neck surgery to correct an old injury that he aggravated early last year, forcing him to stay off the road for all of 2019. He received his Parkinson's diagnosis last February, around the same time.

Four years ago, Lita released an autobiography, "Living Like A Runaway: A Memoir", via Dey Street Books (formerly It Books),an imprint of HarperCollins Publishers.