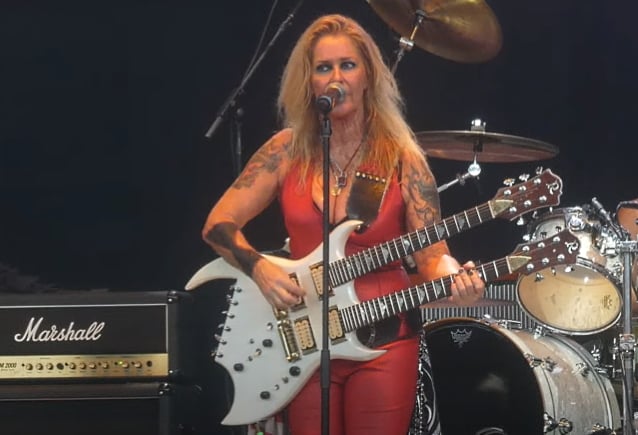 Lita Ford spoke to QFM96's "Torg & Elliott" radio show about what it felt like to return to the live stage after more than a year of being unable to tour due to the coronavirus pandemic. She said (as transcribed by BLABBERMOUTH.NET): "Oh, God. It was magic. I mean, it still is. But the first few shows, we were just, like… In [March] 2020, we were on a cruise ship, and that's when the whole COVID thing came down. Five bands were canceled on the cruise ship, and we were just sent home. We were just, like, 'Okay, your year is canceled. There are no gatherings of 250 people or more, and there's not gonna be any rock shows.' And we were just, like, 'Oh, what? We've gotta go home? And do what? And wait. And just wait it out.'

"I mean, we're thrilled to be back on tour," she continued. "And we're so happy that there's fans out there that feel the same way we do. And the audiences have just been rocking — really great."

Asked how she occupied her time during the pandemic, Lita said: "Honestly, I didn't realize it, but I really needed a rest. And we'd been on tour for 10 years. And it's, like, 'Wait a minute. So now we're not on tour now?' And so there's nowhere to go, there's nothing to do, no one can come over. And so you have to just kind of keep your wits about yourself and eat healthy. I took a lot of vitamins and rode my bike. I ride my mountain bike. So I'd just go out and I'd ride through the mountains and come home and rest. And it really did us all a lot of good. But I'm really happy it's over."