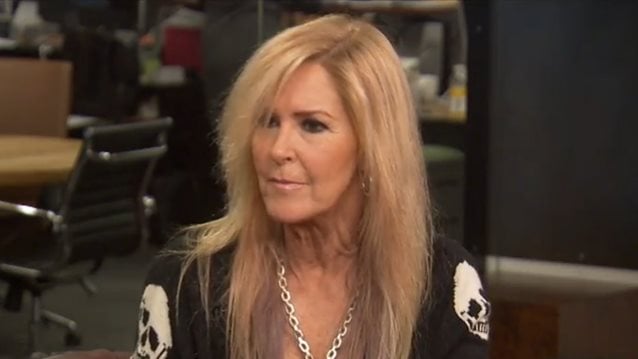 On February 23, Alyona Minkovski of HuffPost Live conducted an interview with '80s hard rock queen Lita Ford. You can now watch the chat below.

Speaking about her brief exit from THE RUNAWAYS forty years ago after learning that her bandmates were gay, Lita said: "This was in the early '70s, mid-'70s, so I was not aware of homosexuality; I didn't know anything about it. And it was still in the closet; nobody came out and said, 'I'm gay' — nobody came out at that time. And when I found out that the girls were all gay in the band, I wasn't sure how to take it, and I didn't know what it was. I was only sixteen at the time. And I quit the band. I went home and I told my parents that it was the manager's fault; I blamed it all on him and said that he was too weird and I couldn't handle him — he was just too freaky. But that wasn't the case."

She continued: "So I had given it a couple of weeks and thought about it, and I thought, 'You know, it's really no big deal. I shouldn't worry about that. And I hope to God that they call me back and get me back in the band.' Because I was thinking that they would go on to achieve superstar status and that I would just be sitting at home and doing nothing. And thank God they called me back and they said, 'Lita, we can't find anybody that can play guitar like you. Please come back.'"

Asked if there were was any tension between her and her bandmates after her return to THE RUNAWAYS, Lita said: "No, there wasn't. And they knew I was straight. They didn't bother me about it, we didn't bag on each other about it. We just carried on, because it was no big deal. But, to me, it was back then, and it just really threw me for a loop. I didn't know that people do that."

Lita Ford launched a solo career after the breakup of THE RUNAWAYS, which also featured Joan Jett and Cherie Currie.

"The Runaways" was directed by Floria Sigismondi, who was best known for directing music videos by such artists as DAVID BOWIE, MARILYN MANSON, and SHERYL CROW.

Lita Ford's memoir "Living Like A Runaway", was released on February 23 via Dey Street Books (formerly It Books),an imprint of HarperCollins Publishers.