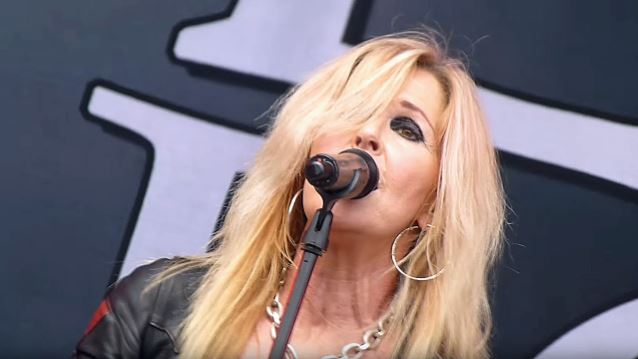 Lita Ford says that the infamous scene in "The Decline Of Western Civilization Part II: The Metal Years" movie in which then-W.A.S.P. guitarist Chris Holmes can be seen guzzling vodka in his pool "destroyed his career."

Holmes became legendary for the scene in the 1988 movie in which he was interviewed while floating in a swimming pool, fully clothed and visibly quite intoxicated while his mother sat poolside. The interview stood out in stark contrast to the more light-hearted and humorous interviews conducted by director Penelope Spheeris, which mostly portrayed rockers as good-natured, though often dimwitted or deluded, party animals. During the interview, Holmes smiled drunkenly at the camera, deeming himself "a full-blown alcoholic" and "a piece of crap" despite his band's success, and punctuated his remarks by guzzling from three bottles of vodka. At the end of the interview, Holmes upends a full bottle of Smirnoff over his head as he rolls out of his inflatable chair and into the water.

Ford, who was married to Holmes for two years in the early 1990s, spoke about Holmes's appearance in the movie during a recent interview with Meltdown of the WRIF radio station. She said (hear audio below): "That scene really ticked me off, because that was a setup. Penelope Spheeris, who was the producer of the film, set Chris up for that scene, which I thought was just dirty. And he ended up pouring pool water all over his face. It's not vodka in that bottle. Can you imagine pouring vodka all over your face like that? It was a setup, and it really ruined his career. It just destroyed his career, which is why he doesn't live in this country anymore."

Calling Sandy Holmes "a nice lady," Ford clarified that Chris and his mother "did drink — they weren't clean and sober — but, I mean, to that length, to where he pours it all over his face was just ridiculous. And then Penelope Spheeris made it out to look real, like he's really pouring this vodka on his face, it was just overkill," she said. "And… I don't know… For me, it was upsetting, 'cause it wasn't true."

According to Lita, "The Decline Of Western Civilization Part II: The Metal Years" is "supposed to be a comedy. And then [Penelope] came out with 'Wayne's Word', which was a huge hit," she said. "And, again, it's a comedy. But when she did that with Chris, it just destroyed his career. But… I don't know… He didn't do too much to make up for it either."

"The Decline Of Western Civilization" received a deluxe box set release in June 2015 from Shout! Factory.

A couple of years ago, Spheeris spoke to Goldmine magazine about the Holmes scene, explaining that she didn't think she got the interview when she first shot it. "I remember saying, 'We're going to have to reshoot this.' Because we didn't get anything," she said. "The guy's just sitting there screwing off and we didn't get anything. And then I saw Jon and Val [Jonathan Dayton and Valerie Faris], who are the producers, and I told them, we're going to have to reshoot that interview with Chris Holmes. And they said, 'Well, too bad, because we don't have enough money to reshoot it.' So I tried to cut something together and include it. I would never have imagined it would be the most talked-about and kind of most memorable moment of the movie."

Asked what happened in the five or ten minutes after she finished the interview, Spheeris said: "I think I was so stunned… You know how when you're in shock and you don't remember what happened? I don't remember! I don't remember him afterwards. Because I was just horrified that I didn't get an interview. I'm sure somebody must've given him a towel and… you know, most of that, [Penelope's daughter] Anna [Fox, who was instrumental in assembling the bevy of extras for the elegant box for the 'The Decline Of Western Civilization' trilogy], when she put the DVD extras together, she pasted together all of the interviews from beginning to end. And so you can see in there the entire progression — or I should say digression — of his interview. And most of that clear liquid was pool water, by the way."

In a separate interview with Rolling Stone, Spheeris offered more details about how the scene was shot. She said: "I don't remember if the pool was my idea or Chris's idea, but it was my idea to have his mom come down, 'cause I knew Sandy [Holmes]. She looks like she knows how far she can go with what she says to him. Like, she can't be too critical or he's just gonna go off on her.

Holmes spoke about his appearance in "The Decline Of Western Civilization" during a 2014 interview with Metallväktarna. He said: "I get a lot [of questions] about that. [People wanna know], 'Was it alcohol? Were you drunk?' Or whatever. Yeah, I was drunk. I'm not known to be a liar. In fact, I was real drunk; I couldn't even talk. So a lot of people ask me, 'How do you feel about that being on TV?' or whatever. The only thing I don't like is where some kid will come up to me and go, 'Man, that's the coolest! I wanna live like that.' And, to me, personally, that's, like, me going down the tubes. And why would somebody wanna live like that?"

The Holmes scene in "The Metal Years" made quite an impression on STEEL PANTHER singer Michael Starr, who later told The Verge that it "shaped my whole career, to be quite honest with you. At that point, heavy metal was at its peak. It was awesome to be drunk, floating in a pool," he said. "You knew you had a disease and you were going to kill yourself eventually, but that was cool back then. People just looked at that and said, ‘Wow, this guy knows how to party. Everybody knows how to party.'"