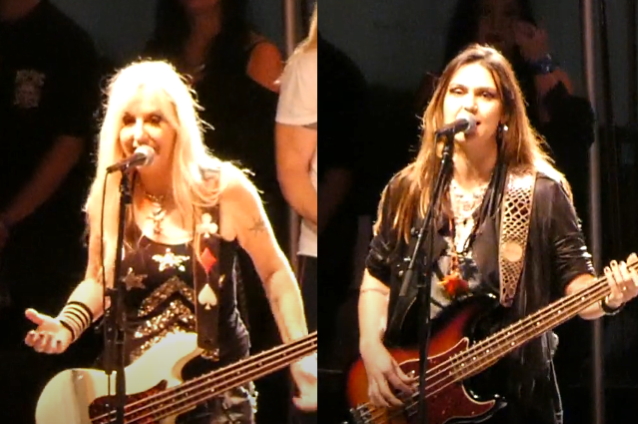 Longtime VIXEN bassist Share Ross has announced that she is "taking a hiatus" from the band. Her replacement is Julia Lage, formerly of the Latin Grammy-nominated Brazilian rock group BARRA DE SAIA and wife of Richie Kotzen, who recently completed a run of West Coast dates with her husband's SMITH/KOTZEN project.

Ross made the news of her departure public last night (Tuesday, February 8) during VIXEN's pre-Monsters Of Rock cruise concert at Magic City Casino in Miami, Florida. After playing the first few songs of the set with her bandmates, Ross told the crowd that "life got a little complicated" and that "something has to give," resulting to her decision to "step away from VIXEN for a while." She then introduced her "amazing" replacement and urged the VIXEN fans to "graciously" open their arms and welcome Lage to the group. At that point, Julia and her new bandmates launched into the track "Streets In Paradise" and played the last couple of songs of the set with Ross watching the proceedings from the side of the stage.

The only remaining member of VIXEN's "classic" lineup is drummer Roxy Petrucci, who is also joined in the group by guitarist Britt Lightning (a.k.a. Brittany Denaro) and singer Lorraine Lewis.

It was announced at the start of the pre-party that Vixen had a big surprise during their show.
I've been to thousands...