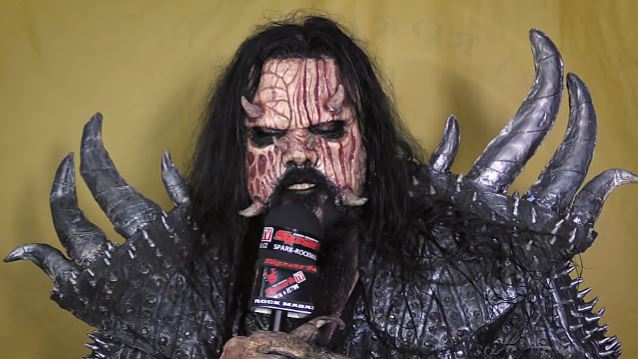 LORDI's New Album Due In September

Finnish heavy metal monsters LORDI are currently mixing their new album for a September release. The as-yet-untitled follow-up to 2014's "Scare Force One" is being produced by Nino Laurenne, who previously worked on the band's 2008 effort "Deadache".

Speaking to Spark TV, which is part of the Czech monthly magazine Spark, LORDI frontman Mr. Lordi stated about the band's new album (see video below): "We are trying to do something different within the LORDI frame this time. It's like a split album between ourselves.

The LORDI frontman also confirmed that the band's next record will once again come with a brand new look for the members of the group. "Like on every album, we do new masks and costumes," he said. "They are actually in the works right now.

"It was really shitty that the timing was overflapping now. 'Cause originally we were supposed to be in the studio [to record the new album] already in December [2015]. Then we were supposed to have the album out already in May, last month. But then my father died two weeks before the studio [was scheduled to start], so everything [got pushed back]. And then there was the Christmas break and the fucking New Year, and we lost our original producer, Mikko Karmila, who was supposed to do it. And then we were kind of, like, 'Oh, what the hell do we do now?' So, well, we found Nino Laurenne, who actually produced 'Deadache' eight years ago, nine years ago or something, which was fucking awesome to go back to the same studio. So it will come out in September. So, of course, now the timeline was, all of a sudden, really pushing. So that means that at the same time we were in the studio, I had to start doing the new costumes and masks. But they are almost done; they're 98 percent done now.