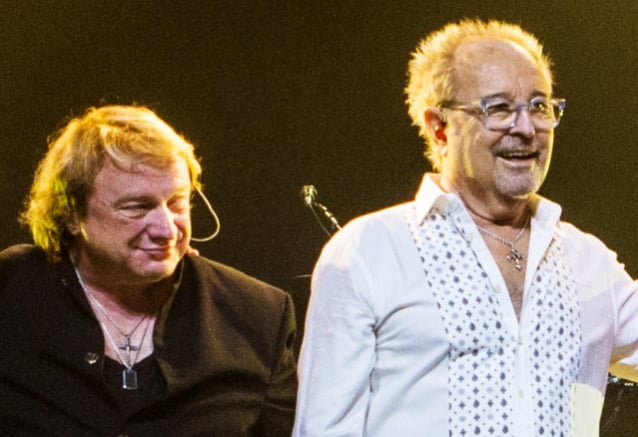 Former FOREIGNER singer Lou Gramm says that "greed" was the reason he wasn't listed as one of the songwriters for the band's smash hit song "I Want To Know What Love Is". The power ballad, which is credited solely to FOREIGNER's founding guitarist Mick Jones, was released in November 1984 as the lead single from the group's fifth album, "Agent Provocateur".

Gramm discussed his supposed lack of contribution to the track during a brand new interview with The Sessions. Speaking about his involvement with "I Want To Know What Love Is" and another FOREIGNER smash hit, 1981's "Waiting For A Girl Like You", he said (as transcribed by BLABBERMOUTH.NET): "I did help co-write them, although I didn't get any credit for 'I Want To Know What Love Is'.

"I've always loved writing melodies and lyrics," he continued. "I liked working on arrangements and everything too. And [Mick] was the master of arrangements. So we crafted both of those songs together; [I'm] extremely proud of both of 'em.

"After we would record an album, Mick and I would sit down and we'd run down a list of the songs, and he would say, 'What do you think you want on this song?' And I would say, 'I think this one I contributed quite a bit. I would ask for about 40 percent.' And he said, 'That's fine.' And there were a lot of songs, like 'Hot Blooded' and things like that, that were [split] 50-50 — a lot of songs. And 'Waiting For A Girl', he really wrote most of that, but I had a good part of that too. I think that was 65-30, and then Ian McDonald had a little piece of that too. I was fine with it.

"But then 'I Want To Know What Love Is'… The two of us… [Mick's] home was about 15 minutes from my home. So I would drive over to his house and we would work on that song," Gramm explained. "There'd be moments where it was just magic and then we'd hit our head on something creatively that we couldn't get to the next point. And so we almost had to put the song away for a couple of weeks and come back to it again. I felt we had worked our tails off to make that song what it is. And at the end of that album, when it was time to decide what the percentages were, I wrote down what I thought it should be and he wrote down what he thought it should be. I think I wrote down 65-35 — 35 for me, 65 for him. And I opened the little piece of paper that [contained his note on] what he thought [the correct split] was, and he wrote down 95-5. I was so stunned and crushed that he'd think I contributed next to nothing to that song.

"And here's another [detail] for you," Lou added. "[Mick] was working with a choir in one studio while we were recording that song. I was in another studio with an engineer singing the lead vocals. I did them by myself — I did all the ad-libs, I did all the emotional little nuances and stuff. And usually when I'd sing the lead to a song, especially a song as potentially important as that one, he was right in the control room commenting on every line: 'This could be better,' 'You could do that,' 'You could do this.' I did the whole thing myself while he was working with the choir. And that ended up being the lead vocal. I don't even remember him saying, 'Good job, Lou.' But that was the lead vocal. I thought that was a pretty serious accomplishment for me, only to be denigrated to [being] an author of five percent. That put a wedge in us that was the beginning of the end.

"After it was recorded, we would discuss who put what into the song, and here's what the split should be. And for the most part, we were always within five to 10 percent and we'd iron it out. I said 65-35 — 65 to him, 35 to me — and he comes back with 95-5? I should get 25 [percent] just for the vocal performance. All I could think of was greed. It was an awesome song. We all knew it was gonna be a smash. This was his chance to step on me. And you know what I told him after [I saw his proposed split of] 95-5? I said, 'Five, Mick?' I said, 'You should just keep it all.' And he did. He didn't say, 'No. Please. Let's work it out.' I said, 'Five percent for me after all the work I did on the song?' I said, 'You should just keep it all.' And he didn't say anything. He just kept it all. And you know the millions and millions that that song has brought in? Over the years, it's been covered by at least three or four artists who have gone to Number One with that song."

The 72-year-old Gramm left FOREIGNER for good in 2002 and has battled health issues in recent years, including the removal of a non-cancerous tumor. He told the Democrat & Chronicle in 2018 that he was planning to retire, but still reunited with FOREIGNER for several shows that year to celebrate the band's 40th anniversary.

FOREIGNER replaced Gramm with Kelly Hansen in 2005. Jones, the only remaining original member of FOREIGNER, suffered from some health issues beginning in 2011, eventually resulting in heart surgery in 2012.