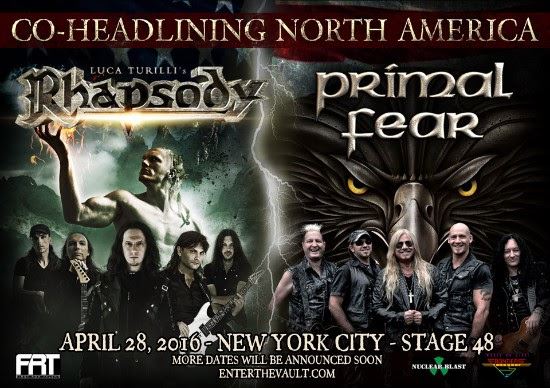 Italy's LUCA TURILLI'S RHAPSODY and Germany's PRIMAL FEAR will embark on a North American co-headlining tour next spring. The trek will kick off at a very special show on April 28 at Stage 48 in New York City. Pre-sale tickets for the New York date are now on sale.

"We are all extremely excited and looking forward to playing a memorable show in New York on April 28, 2016," commented Luca Turilli. "It will be a true honor to co-headline that special evening with our friends of PRIMAL FEAR. And that will be just the beginning, as the two bands will bring their glorious music across U.S. from the east to the west coast. Many more dates will be announced in 10 days. Stay tuned!"

LUCA TURILLI'S RHAPSODY's latest album, "Prometheus, Symphonia Ignis Divinus", is now available on Nuclear Blast. The CD was composed and produced once again by Luca Turilli, responsible as always of all the orchestral and choral arrangements. It was recorded and mixed at the Backyard Studios of Sebastian Roeder (BONFIRE) and mastered by Christoph Stickel (MICHAEL SCHENKER'S TEMPLE OF ROCK) at MSM studios. Several special guests appear on the record, including Ralf Scheepers (PRIMAL FEAR), Dan Lucas (KARO) and David Readman (PINK CREAM 69).