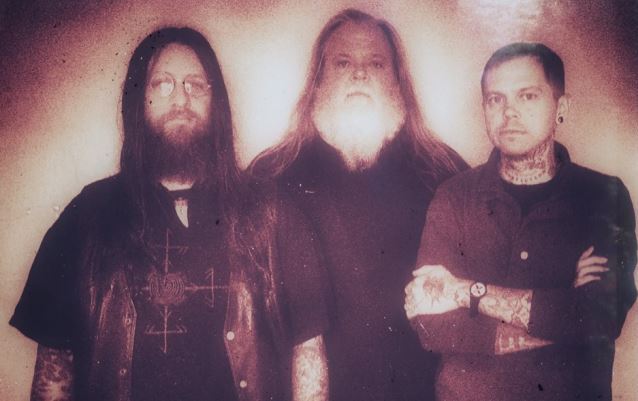 One of the year's most unexpected doom metal albums is also now one of 2013's most anticipated, as the debut LP from Pacific Northwestern trio LUMBAR is being prepared for arrival.

While this brutalizing slow-motion trio boasts what some are referring to as "supergroup" status — containing members Aaron Edge (HIMSA, IAMTHETHORN, ROARETH, BROTHERS OF THE SONIC CLOTH),Mike Scheidt (YOB) and Tad Doyle (TAD, BROTHERS OF THE SONIC CLOTH) — LUMBAR was formed by these longtime friends for much more than simply creating riffs. The brainchild of Aaron Edge, LUMBAR came together earlier this year when the well-known guitarist/drummer/graphic designer was unexpectedly diagnosed with multiple sclerosis. What would be his final musical endeavor before waves of rapidly-spreading pain engulfed him and extended hospital stays became more than frequent, is now his most imperative.

On LUMBAR's debut album, "The First And Last Days Of Unwelcome", Edge is joined by Mike Scheidt and Tad Doyle, the latter of whom also shares rank in BROTHERS OF THE SONIC CLOTH with Aaron, who helped bring this intense and important project to fruition. The musical result is as diverse and destructive as one may expect from such a lineup, with the varied influence from this trio of musicians coalescing into seven organic and tonally oppressive movements. Ethereal ghostly passages and spacious expanses of minimalistic disharmony cone to an end in sonic obliteration through mesmerizing and pulverizing, as an array of distinct vocal mantras echo from the heart of it all.

Southern Lord will release "The First And Last Days Of Unwelcome" on LP and digital formats on November 26, followed by a CD version direct from the band and a cassette version via Holy Mountain, with all of the band's proceeds going to aid Edge's medical expenses and treatments.

The cover art for "The First And Last Days Of Unwelcome" was created by Daniel P. Carter (HEXES, KROKODIL, BLOODHOUND GANG).

"The First And Last Days Of Unwelcome" track listing: