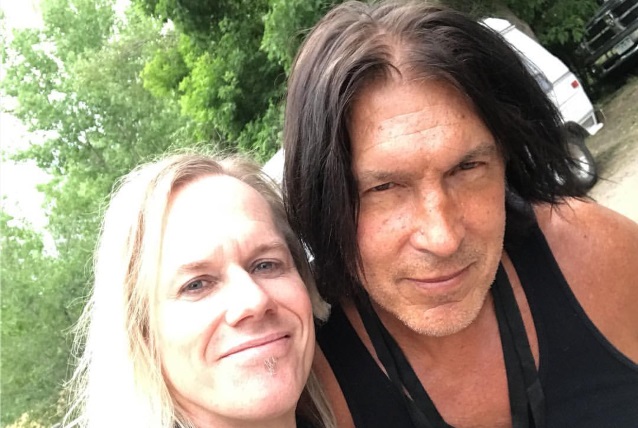 LYNCH MOB has been rejoined by singer Robert Mason for "selective dates" following the recent departure of Oni Logan. Guitarist George Lynch told SiriusXM's Eddie Trunk: "[Robert is] doing the Monsters Of Rock cruise with us, and there's an '80s In The Park festival we're doing in a couple weeks, along with a few others. But we're not sure how deeply he's going to be involved in LYNCH MOB, if it's anything that's going to stick. His primary band, obviously, is WARRANT, and we recognize that and respect that. I'm not trying to steal him out of WARRANT or anything like that. That's his home. But we have history, and it's a wonderful fit. Him and Myles Kennedy are in that world — I mean, where do you go from there when you sing like that? I mean, it's just incredible. It's fascinating to me to work with a guy like that, that has that kind of pipes and that sort of consistency and can basically just do anything that he wants, it seems like. He's a vocal contortionist."

George also revealed that drummer Scot Coogan is back in LYNCH MOB. "I played with Scot off and on in various projects over the years, and he was in LYNCH MOB a number of variations, most recently up to a few years ago," the guitarist said. "Scot's wonderful. He brings so much to the table. He's one of those multitasking guys. He's a great singer; he's a great songwriter; and he plays everything a little bit. He's very tuned in with drum programming and the recording side of it, so that always helps. He's like a Swiss army knife, plus his drumming, it's got a great R&B feel. LYNCH MOB has that — LYNCH MOB has this blues-based, R&B-based, heavy rock thing. He really brings a lot to the table. He's a great fit, and we're great friends."

As for the rest of the LYNCH MOB lineup, George said: "[Bassist] Sean [McNabb]'s still here. We've got a lot of history too. He was in LYNCH MOB as well in the early 2000s. It's just this kind of revolving-door thing. [Laughs] I was at the NAMM [Ultimate] Jam, and it was kind of funny — I was like, 'There was more people backstage that have played in LYNCH MOB than haven't. I played with all these you-know-whats at one point or another."

Lynch declined to get into specifics about Oni's decision to exit LYNCH MOB last month, explaining: "We have tremendous respect for each other on the musical level, and I'll just leave it there and wish him well. I'm sure he's going to do fine. He's one of the great ones. Maybe he hasn't been recognized like I feel he should be. To me, he's a modern-day Paul Rodgers. We made a lot of fantastic music together, including the latest record, 'The Brotherhood' — which didn't turn out to be such a brotherhood after all [laughs], but it's a beautiful, beautiful record. I'll have a soft spot in my heart for these guys and wish it had continued on, but it didn't, so..."

Mason and Lynch are also involved in SUPER STROKE, a new project in which they are joined by two other members of DOKKEN's classic lineup, bassist Jeff Pilson and drummer Mick Brown.

"The Brotherhood" was released last September via Rat Pak Records.