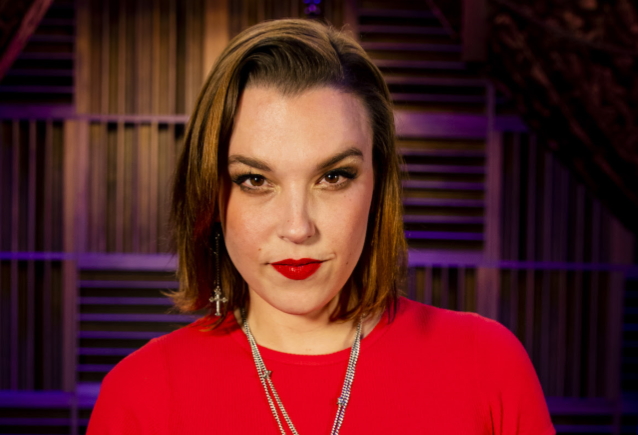 HALESTORM frontwoman Lzzy Hale spoke to the 97.1 The Eagle radio station about her recent comment that she has been writing the best songs of her life during the coronavirus pandemic. She said (as transcribed by BLABBERMOUTH.NET): "I hope so anyway. That's the way I kind of feel with every album cycle — that you keep trying to top yourself. But it's different with the way the world has kind of changed. And also when you're in that position where there's something, specifically with me with touring, we're used to being out on the road for about two hundred to two hundred and fifty days of the year, so when this big part of your life and this extension of your personality, this mission statement that you've always had in front of you, and that is stolen from you, you have to put that energy and that outlet into something else. And thankfully, yeah, the writing process — I've put all that energy into the songs, because I have nowhere else to put it. [Laughs] So, yeah, it's really exciting, and I can't wait for everybody to hear the new material."

Three months ago, Lzzy told Matt Pinfield of KLOS's "New & Approved" series about the lyrical themes covered in the new HALESTORM songs: "I'm just now seeing this arc, because there were the songs that we were writing just kind of coming off the road, where it's very confident and very live and energy. And then it kind of starts to get — still keeping the energy up, but then subject matter starts to get a little crazier and maybe a little darker. And then it's kind of starting to dip into some more hope now. So I feel like, in real time, this is going to kind of be like almost a musical documentary of what we've gone through, through this past year and change."

"Halestorm Reimagined", a collection of reworked HALESTORM original songs as well as a cover of "I Will Always Love You", the love ballad made famous by Whitney Houston and Dolly Parton, was made available last August.