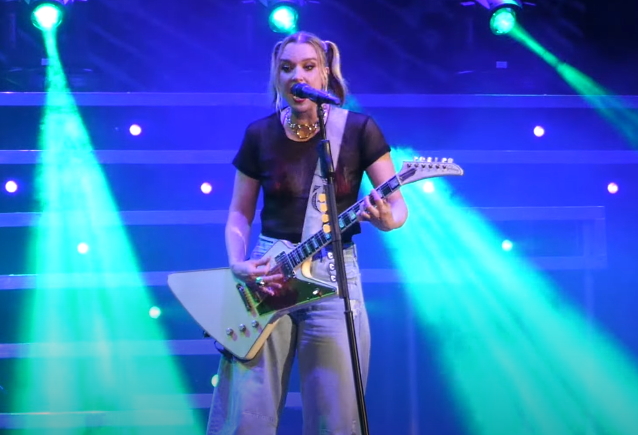 In a new interview with Australia's Noise11.com, HALESTORM frontwoman Lzzy Hale confirmed that she and her bandmates recently "finished recording two new covers." She added: "Whether or not we're going to just release those as individual songs or have a cover EP, I have no idea what we're gonna do with them yet. But we've begun recording some of those just for fun as well."

Pressed to reveal which songs HALESTORM chose to cover this time around, Lzzy said: "I'm gonna tell you one. We ended up doing a cover of 'Jolene' by Dolly Parton in the stylings of HALESTORM. [Laughs] I'm not gonna tell you the other one."

Earlier this month, HALESTORM drummer Arejay Hale told the "Thunder Underground" podcast that he and his bandmates "kind of already have started" on a follow-up to their third covers EP, "ReAniMate 3.0: The CoVeRs eP", which came out in January 2017. He said in part: "We tracked two songs in Nashville before this tour started. But I don't think I'm allowed to say what they are. But, yeah, we've got some ideas in mind.

"I always love covering the modern pop songs," he continued. "Like we did Lady Gaga's 'Bad Romance'; we did 'Get Lucky' by DAFT PUNK; we did 'Heathens' by TWENTY ONE PILOTS. Those, to me, are the most fun. But also I do love the challenge of trying to replicate the brilliance of the classic METALLICA stuff, the SOUNDGARDEN stuff. So that was the most challenging, 'cause you have such a respect for that era that you don't wanna mess it up. You wanna pay respect to them and you don't wanna change anything.

"So, as far as '4.0' goes, I feel like it will probably be a nice balance of those things — paying tribute to the classics, putting our own little twist on it, but also kind of rocking up pop songs," Arejay added.

This past summer, HALESTORM shared rehearsal footage of its covers of "Jolene" and Adele's "Hello" via social media.

Back in 2017, HALESTORM bassist Josh Smith spoke to RingRocker.com about how he and his bandmates go about picking which songs to record for their series of covers EPs. "We start out with basically everyone… Our team… Oh my God! My dad finds out that we're doing a cover album, all I get is texts: 'Oh, you should do this.' But anyone… anyone who finds out we're doing a covers album, all of a sudden you're just getting this crazy list," he said. "So it literally starts out with e-mails of lists and lists, and somehow, over months, we kind of whittle down our list until we get to a short list of maybe ten songs or less. And then we record 'em and see what works and see what we like."

According to Josh, there is at least one added benefit to covering other people's songs when it comes to HALESTORM working on original material. He explained: "What's really cool is that when we do pick these songs, they really do influence us, because it's Songwriting and Performing 101. Where you have to deconstruct a song — a legendary song, essentially — you deconstruct it, and then rebuild it to how it works for us. And it really influences us in a lot of ways."

Added Arejay: "When we did 'Slave To The Grind' [from SKID ROW], we were, like, 'Oh, man! We need a song like this.' And then we wrote 'Love Bites', which is pretty much just off the feel of 'Slave To The Grind'. It's cool, 'cause we used to do that. We used to do three- or four-hour shows with covers and originals. And you're right — it is like training. And I always recommend that for newer artists, younger artists that wanna learn how to play drums or guitar. I always say the best way to really get good and learn how to develop your own style is to learn the styles of other people and learn other songs that you like or that challenge you. And it kind of makes you think differently. It's, like, 'Oh, this guy did these chords,' or, 'This guy played this kind of groove.' 'I bet I can do that in an original song.' So, yeah, it's kind of like training."

Arejay and his sister Lzzy (vocals, guitar) formed the band in 1998 while in middle school. Guitarist Joe Hottinger joined the group in 2003, followed by Smith in 2004.