According to Gigwise.com, MÖTLEY CRÜE will have an official day named after it by the City of Los Angeles' mayor's office.

From now on, July 31 will be known as "Mötley Crüe Saints of Los Angeles Day" in honor of the band's new album.

As previously reported, MÖTLEY CRÜE will perform in a live global concert on Friday, August 1, 2008, from the Mandalay Bay in Las Vegas. The groundbreaking event will be available live online, free of charge, compliments of DeepRockDrive.com and MÖTLEY CRÜE, to anyone with broadband Internet access.

The August 1 event is DeepRockDrive's official launch of a series of partnerships with industry-leading venues to bring live performances to global audiences via the Internet. Fans that previously would be unable to attend performances will now have instant digital access to their favorite artists from the convenience of their own homes.

MÖTLEY CRÜE hits the stage August 1 at 9:30 p.m. PST. As with any concert, tickets are limited so reserve your seat today! Fans can pick up their free ticket now at www.deeprockdrive.com.

MÖTLEY CRÜE's new album, "Saints of Los Angeles", has sold 174,000 copies in the United States since its June 24 release, according to Nielsen SoundScan. The CD is MÖTLEY CRÜE's first studio album since 2000's "New Tattoo", which has sold a little over 200,000 copies in the United States, according to Nielsen SoundScan. The band's last studio effort with all of its original members was 1997's "Generation Swine", which debuted and peaked at No. 4 on The Billboard 200, and has sold more than 300,000 units.

"Saints of Los Angeles" is loosely based on the band's memoir, "The Dirt", which was published in 2001.

MÖTLEY CRÜE's "Crüe Fest" kicked off on July 1 in West Palm Beach, Florida and will hit 40 cities before wrapping up in late August. 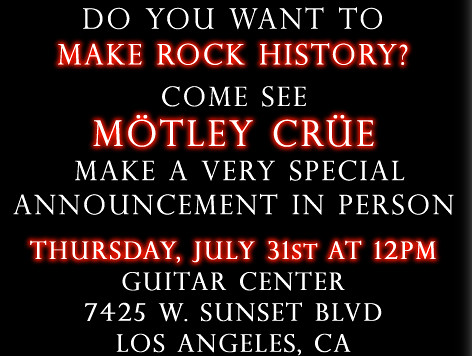 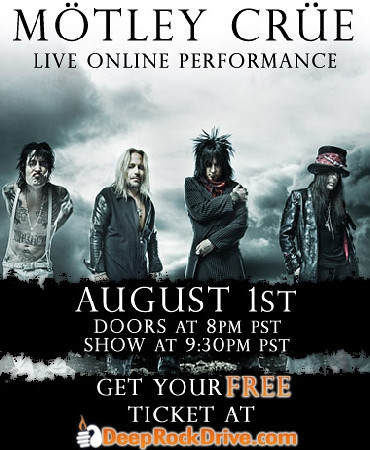