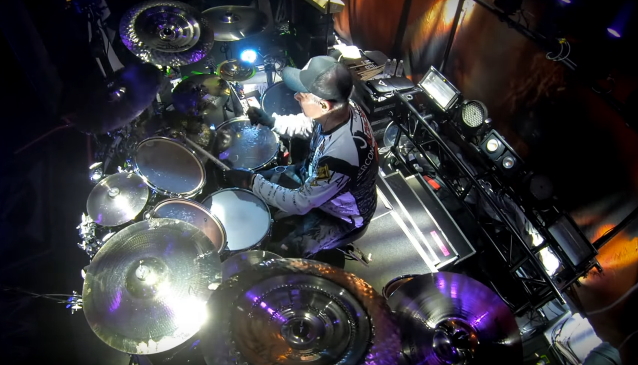 Drum-cam video of MACHINE HEAD drummer Chris Kontos performing the song "Death Church" with his bandmates on February 5, 2020 at Théâtre Corona in Montreal, Quebec, Canada can be seen below.

The North American leg of MACHINE HEAD's 25th-anniversary tour for the band's debut album, "Burn My Eyes", kicked off in Phoenix on January 16, 2020 and wrapped up on February 22, 2020 at the House Of Blues in Anaheim, California. Each show on the trek consisted of two parts: part one saw frontman Robb Flynn and bassist Jared MacEachern performing alongside new recruits, Polish guitarist Wacław "Vogg" Kiełtyka (DECAPITATED) and British drummer Matt Alston (DEVILMENT, EASTERN FRONT); while part two features "Burn My Eyes" played in its entirety for the first time ever, with original drummer Kontos and guitarist Logan Mader joining in.

MACHINE HEAD released a new single, "My Hands Are Empty", in November via Nuclear Blast Records. The track is the latest in a line of singles to be made available by MACHINE HEAD, which issued "Do Or Die" in October 2019, "Circle The Drain" in February 2020, and the two-song "Civil Unrest", consisting of "Stop The Bleeding" and "Bulletproof", in June 2020. "Stop The Bleeding" featured guest vocals from KILLSWITCH ENGAGE frontman Jesse Leach, and was written and recorded just days after the murders of George Floyd and Ahmaud Arbery.