Mick Stingley of ShockHound recently conducted an interview with MACHINE HEAD frontman Robb Flynn. A couple of excerpts from the chat follow below.

ShockHound: You were nominated this past year for your first Grammy Award, but you lost to SLAYER. Mixed feelings?

Flynn: The Grammys have always voted for [bands like] the DEFTONES and SOUNDGARDEN and RAGE AGAINST THE MACHINE in the past... so if they finally got it right with SLAYER, at least they got it right with SLAYER. Five minutes after it was announced they won I got a text from Kerry King, which said, "I'll take the Grammy, but you guys should have won this!" It was very cool of him.

ShockHound: MACHINE HEAD is unique in that you left your record label — and then got asked back. There is a perception that this was because you have such a huge presence in Europe and the U.K.; is this actually the case, or was there more to it than that?

Flynn: Not really. That's one perception...but it's all kind of relative, you know? We've played bigger places [in Europe than in the U.S.], but then there's only like six cities to play [laughs] as opposed to fifty you can play in America. But, yeah — we actually are the only band to part ways with Roadrunner and be re-signed to Roadrunner in the 25-year history of Roadrunner! When we started with Roadrunner, we signed one of those horrible deals that bands sign: We had to give them all of our publishing, all of our merchandising, you know? It wasn't a very fair deal; but when we finally came back to Roadrunner, it was under a lot more artist-friendly parameters. We own our masters, all of our publishing, all of our merchandising; how we present ourselves on the record, in the videos, who produces the records, the artwork that goes on the record — everything about the band is completely in our control. The last two records that we've done have been under those parameters — the biggest records of our career.

ShockHound: Have these last two records earned you a whole new fanbase? And do you tailor your live set to recognize that?

Flynn: Yeah, it's just teenagers — that's who we play to now. In fact, we're playing to a younger audience now than even when we started! Back in '94, metal was as uncool as it's ever been. It was so fuckin' uncool... and I think it's really rad now to see how popular metal is again. Even bands that aren't metal are calling themselves metal! And because of that, there's a lot more kids into the scene again. The kids are what keeps this scene alive. 30-year-old people don't listen to fuckin' metal. They really don't. They've moved on with their lives, they get jobs, they get girlfriends, they listen to what's on the radio. Kids are what keeps the scene alive; and being in a band that's, like, forefathers of the new underground, it's awesome to see this!

ShockHound: How much of a sense of humor do you have to have to be in MACHINE HEAD?

Flynn: [Smiles] You just have to have such a good sense of humor — about your band, about your fuckin' life! You go on Blabbermouth and they take shots at you, and you just gotta fucking laugh! I know all these people in bands who hate it; but I fucking love Blabbermouth! I think it's the funniest shit ever. We are a serious band, and we take every aspect of what we do seriously. But you know, this is an absurd life; it's a fuckin' gypsy's life, and to not be able to laugh at like the absurdity of things...you have to, or your need to learn to. Shit happens. Once you've taken that step to be in a band, you no longer live your life in private — you live your life in public. You have to have a sense of humor.

ShockHound: So, how do you top "The Blackening"?

Flynn: I don't know; people said we couldn't top "Through The Ashes", and here we are. We're not really worried about that — we're just kind of focusing on the here and now. And the next ten months of touring…we still feel like we've got a lot of ground to cover. Especially in light of all the controversy, like when we got cancelled at the [Anaheim] House of Blues, on Disney property — never in a million years would I have thought our band would have concerts canceled on two days' notice because of our lyrics and because of our fans! [They said] we "draw a violent element," and our lyrics were anti-war and anti-government. I mean, we moved to another venue and all the kids came out and it sold out and it was fuckin' awesome; but if anything, it's made us feel so justified about the things we sing about on "The Blackening". So I think there is definitely something more to say, and I think we'll just have to see where it goes. We're still angry.

ShockHound: Let's expand on that — what are you angry about?

Flynn: Well, I think it's spelled out pretty clearly. I work on my lyrics and refine and refine and refine for a long time — I've got three notebooks of lyrics for "The Blackening". I think it's pretty clear where we stand on stuff; but that said, we're not a political band. We tried to make the lyrics not necessarily apply to this moment, but to be timeless. And in order to be timeless, they had to have a certain "vagueity" to them, you know? I think our main thing was that we wanted to have a timeless record — and that in twenty years, when the next fucked-up President takes us into the next fucked-up war for whatever fucked-up reasons that weren't the truth, a song like "Clenching The Fists of Dissent" will still apply. Not to say that all the songs on the record are political, because there's plenty that aren't; but you do have to be conscious of that. And we tried to be vague in those terms; and it gives you poetic license to not have to be so literal about everything. It gives you more areas to go, and it makes it more fun.

Read the entire interview from ShockHound.

Photo below courtesy of DirtJunior.com: 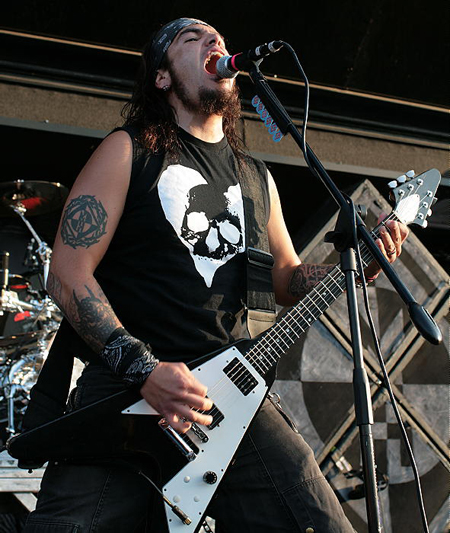