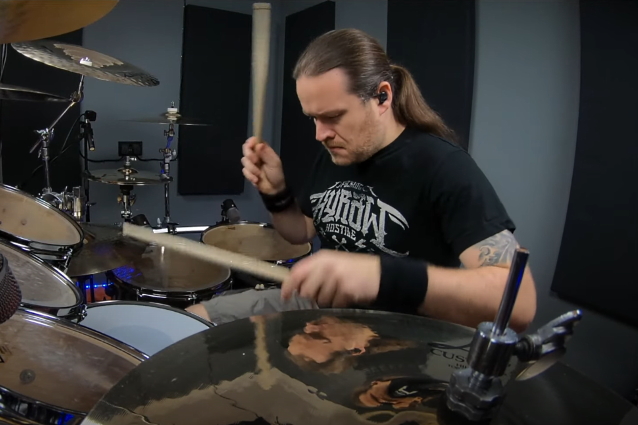 Drum-cam footage of MACHINE HEAD drummer Matt Alston playing the song "Imperium" at his studio can be seen below. He wrote in a message accompanying the YouTube release of the video: "After a long time coming...I'm finally able to start recording play-throughs in my studio!! Songs are played/recorded in ONE continuous take. That means there are: NO Cuts/Drop-ins; NO Replacements/Samples (all drum audio is LIVE from the Drum Mics); Only basic EQ/Compression/Reverbs used! If it's not 'perfect'....that's just real life!"

The British-born Alston (DEVILMENT, EASTERN FRONT) and Polish guitarist Wacław "Vogg" Kiełtyka (DECAPITATED) joined MACHINE HEAD in time for the 25th-anniversary tour for the band's classic debut, "Burn My Eyes", which kicked off in Germany in October 2019.

MACHINE HEAD frontman Robb Flynn spoke to France's HEAVY1 about how the new members landed the gig. "We were doing auditions for a while, and Vogg's audition just fucking blew my mind — it was so fucking tight and fucking accurate," he said. "He sent over [a recording of] 'Imperium' as his first song just as a test. We always had all the dudes do a sound test, just to make sure the levels are good and stuff. I was, like, 'Oh my God! This dude is playing 'Imperium' better than I can right now.' [Laughs] It was crazy. And we ended up talking. Super-nice guy. Matt, same thing. We flew him out, jammed with him, and he killed it."

Each show on MACHINE HEAD's last tour was described in a press release as "a three-hour musical extravaganza," comprised of two parts: part one featured a battery of MACHINE HEAD's modern classics, such as "Imperium", "Halo" and "Now We Die", featuring Flynn and bassist Jared MacEachern performing alongside Kiełtyka and Alston. Part two featured "Burn My Eyes" played in its entirety for the first time ever, with original drummer Chris Kontos and guitarist Logan Mader joining in.

McClain and Demmel both left MACHINE HEAD in October 2018.

MACHINE HEAD is currently working on its new album at Sharkbite Studios in Oakland, California with producer Zack Ohren for a tentative summer 2022 release. At least several of the LP's tracks — including "Become The Firestorm", "Arrows In Words From The Sky" and "My Hands Are Empty" — were recorded with drummer Navene Koperweiss (ENTHEOS, WHITECHAPEL, ANIMALS AS LEADERS).

MACHINE HEAD will team up with Sweden's Viking metal overlords AMON AMARTH for a co-headline "Vikings And Lionhearts" European arena tour in September and October 2022. Support on the trek will come from THE HALO EFFECT, the new band featuring five former members of IN FLAMES: Peter Iwers, Daniel Svensson, Jesper Strömblad, Niclas Engelin and Mikael Stanne.