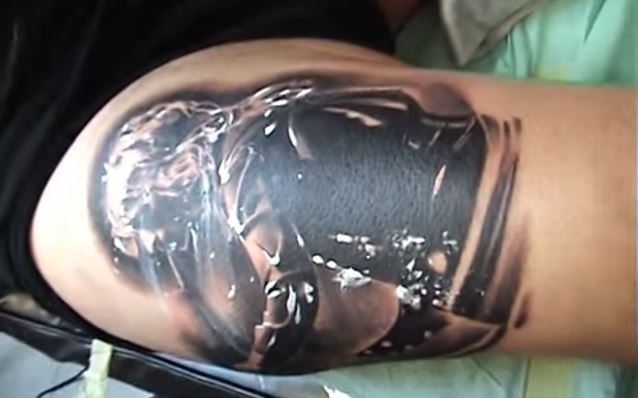 On August 13, MACHINE HEAD guitarist Phil Demmel got a portrait of late OZZY OSBOURNE axeman Randy Rhoads tattooed on his right thigh. Video footage of the session, which took place at the Rock 'N' Roll Tattoo Studio in Warsaw, Poland, can be seen below.

Demmel was one of the musicians who performed at the "Randy Rhoads Remembered: A Celebration Of A Legend" series of concerts in January and June.

"In The Vault With Shanda Golden" (web site) spoke with Demmel after the January 25 performance at The Observatory in Santa Ana, California about his participation in the event. You can watch the chat, as well as footage of his performance, below.

Said Demmel: "Watching Randy at 10 a.m. in the Oakland Coliseum was my first concert experience and it was life-changing. It made me want to not only play guitar, but to perform with passion and emotion."

He added: "[I was] beyond honored to be part of this celebration of a true legend and an immense inspiration."

Demmel talks to "In The Vault With Shanda Golden" about his participation in "Randy Rhoads Remembered: A Celebration Of A Legend":