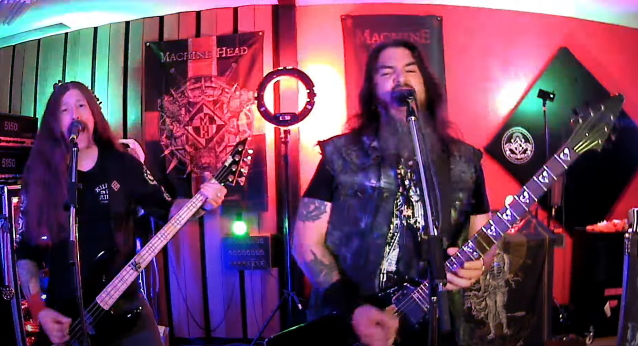 MACHINE HEAD's Robb Flynn and Jared MacEachern held the latest "Electric Happy Hour" on Friday, January 28 during which they celebrated the fourth anniversary of "Catharsis", the band's ninth studio album, by performing it in its entirety. You can now watch video of the performance below.

In a message accompanying the YouTube release of the video, MACHINE HEAD said: "Due to the wildly varying guitar tunings used on the album, the boyz have been forced to modify the running order of the play-thru but this has only served to increase the ferocity of the set-list. Album opener 'Volatile' and live set firm favorite 'Catharsis' are followed up by the deep cuts 'Beyond the Pale', 'Psychotic' and 'Hope Begets Hope'. 'Grind You Down' and 'Eulogy' are given their live debuts and we are treated to full arrangements of 'Behind a Mask' and 'Bastards' rather than the usual stripped down Electric Happy Hour versions."

In a 2018 interview with Australia's The Rockpit, Flynn was asked about the crowd reception to the songs from "Catharsis", which got mixed reviews upon its release in January 2018. He said: "You know, it's funny because I've been touring for 30 years now, and I actually did my first tour in 1988, and even before that, I was touring up and down California, and even before the Internet, there's always the type of thing where people were writing and if you were around before the Internet, you would read magazines and there was always the letter section and people would be talking shit and 'This song sucks' and 'This band sucks' and 'This record sucks'. [Laughs] I mean, we had so much of that during the 'Burn My Eyes' era, it was crazy; people either really loved it or really hated it. I think it's just when you make something that, and I don't want to say it's controversial, but when you make something that has a strong stance, a strong opinion, like you're taking a side, people feel something from that. To me, there's been a lot of criticism but the fact that anybody is bothering to criticize, I think, is cool because it means they care.

"We have really passionate fans, we have some really dedicated fans and they want to fucking talk about it, and that's awesome," he continued. "In a lot of ways, that's what the record was about — I wanted you to think, I wanted you to feel, I wanted you to feel something. Anything — anger, sadness, joy, fucking resentment; whatever the feeling was — and make you open up your mind a little bit. Make you think outside of what metal could or couldn't be, and so the reaction that we got was kind of the reaction that… I didn't not expect that reaction. And you never know when you go out and play it live what's going to happen, and you never know what songs are going to connect, and there's always going to be some songs that just fucking connect and go crazy live, and there's other songs where there's always just a dud live, and you never know why and it's like that with every record.

"I've gotta say, man, the songs on this record, like the track, 'Catharsis', which was such a surprisingly controversial track, I thought that was just a straight-up MACHINE HEAD banger, like a classic. So many people just fucking raged about that song, and we were, like, 'What the fuck!' and then when we played it live, oh my god! People lost their fucking minds, man! Every night it's a highlight of the set. 'Triple Beam' is a highlight of the set; 'Is There Anybody Out There?' is a highlight of the set; and it's almost the type of thing where everything you read on the Internet is wrong. [Laughs]

He added: "Of course they're fucking flipping out on all the songs that everybody goes crazy over live! And maybe that's because of it, or I don't know why. It's weird; it's really weird."

Flynn went on to say that it makes him and the rest of MACHINE HEAD "feel good" to see such an overwhelmingly positive response to the band's new material.

"We're on our ninth record, we've been MACHINE HEAD for 25 years now, and it's a great feeling to go out and know that, this is not the oldies, this isn't the 'Burn My Eyes' show, this is us moving forward and people are still reacting to that in a fucking super-positive way and that is not the traditional arc of a band this far into their career," he said. "It makes us proud, it makes us feel a sense of pride on the music that we're doing and what we do because I think a lot of what music is for us, music is a feeling. Music is something that you can't even put your finger on, it's something that transcends explanation and I don't know where the inspiration comes from. I just write and I just write about what I feel like and sometimes it's political and sometimes it's just really fucking negative and sometimes it's stories about my past and sometimes it's about what I think about the future. Sometimes it's happy, sometimes it's party fucking songs — 'let's get hammered and wasted and fucking rage!' It's all over the map, and for me, it's a great way to express and release this stuff, and I think a lot of times metal has this surprisingly pretty conservative slant about what you can and can't do and it gets a little annoying."