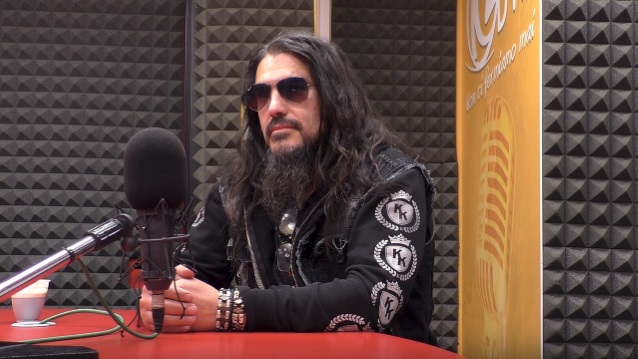 MACHINE HEAD frontman Robb Flynn was recently interviewed by Barbara Caserta of Italy's LineaRock. You can now watch the chat below.

Asked if there is one former MACHINE HEAD bandmate that he misses the most as a partner and collaborator, Flynn responded: "I don't miss anybody, just like you don't wanna be with your ex-husband [laughs] or your ex-boyfriend.

"People ask me this question all the time. I do these YouTube Live [question-and-answer sessions], I do a Facebook Live every Tuesday, every Friday; it's a great way to interact with the fans, and I always answer fan questions. Every time I do it, [someone asks me] 'Are you still friends with [former MACHINE HEAD drummer] Chris Kontos?' 'Are you still friends with [former MACHINE HEAD guitarist] Logan Mader?' I'm, like, 'Who cares?' But in another way, I get it, because there's this feeling that you were this tight [unit].

"I started the band 25 years ago and I got guys who, in some ways, I barely even knew — we barely knew each other," he continued. "And then we started playing music together and then it just so happened that we had a bunch of success and then some of them decided that they didn't wanna be here or we kicked them out or whatever the case may be. Some of these guys were here for, like, three years, and then that's it. It's just like a split second of your life. I'm 50 years old — three years is nothing. And so because we were never really friends to begin with, it's not like there's thing long missing, because… It's a strange thing. But there's this illusion that because you were in a band together, you were just the best friends ever. And granted, we did live a lot of life together, because we were on tour and we had the success, but in another way, [we] barely knew each other. And so I don't miss anybody. I don't miss them, just like I don't miss my ex-girlfriends, just like I don't miss friends that I had when I was a kid. Your life moves on and you just keep on going and growing and I hope to better myself and I hope to learn from all of my experiences. Because I think some people come into your life, even if it's just for a short while, you learn something from it — good or bad. You never know what it could be — it could be a bad experience, it could be a great experience, but you learn from it, and for that, I'm always grateful. I'm always grateful for all of the learning experiences that we had, but I don't miss it."